I know its been a while, the guys at the club keep reminding me..

So what have been splashing paint on?

Well I did a couple of cannons for Blackpowder, then decided to blast out some mantic zombies for malifaux, now don't get me wrong the wyrd miniatures are super nice but £9 for 3, errr no thanks as 6 would bet me a box of 30 mantic ones! 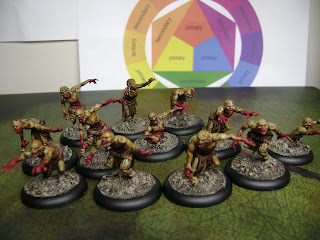 I was a bit sceptical with buying these as the elves were a little "thin" but most of the undead range looked quite tasty, I've about 16 left over so I'll bang those into the bits box of doom and rediscover them in about 2 years!

I painted these pretty much how I did the death guard a couple of years ago, deathguard magic, 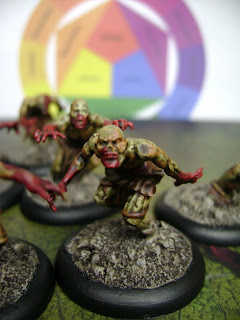 saying that I've a feeling that my chaos will be dusted off as the grey knights are about to land Spencer is starting to froth slightly about dreadknights and all that jazz, I'm even going to get the daemons boots muddy and see how good they really are, I know I'll get my ass handed to me but hey its gonna be an epic showdown....

So as real-life has been the usual action packed pace, I've not really managed to get any games in so just been painting like a Duracell bunny, it started with check your 6 and the battle of Britain battle pack that I got from raiden miniatures linky link so I finished off the Germans and the English 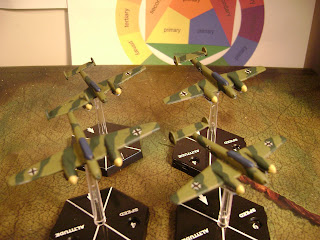 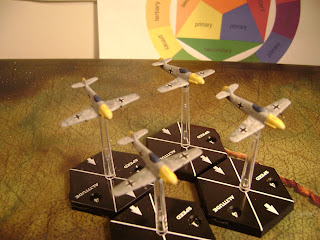 and the British, 3 Spitfire1's and 3 hurricane 1's 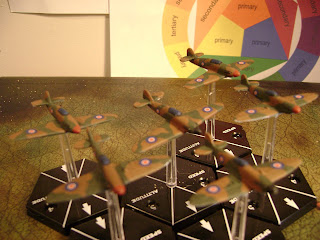 Now there is a bit of a debate with regards to what model company to go for as I've got most of my stuff from Raiden miniatures I've got as much as can from them, but Dave "the madman" is oping for Heroic and Ross Linky link now the difference is price isn't that much a fighter will cost on average £1.10 from Raiden and about 60p from H&R, but have a look at the following.. 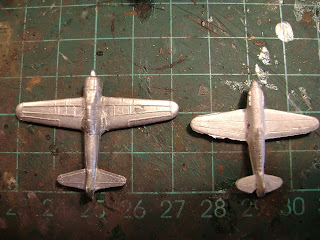 A zero and a D.520 straight out of the baggy

I'll let you work out which one each company does...

And talking about Dave "the madman" he's managed to accumulate 54 allied fighters already! and as I'm on my yearly pilgrimage to Salute next month I've already had a shopping list from him for 16 B-17's!! looks like I'd better get me hands on some ME262's

So what else I hear you mumble..

One of the other chaps at the club has kinda lost the love for warmachine after OD'ing on it and wanted to play something else and like a Phoenix from the flames, Flames of war is go! I've always played the Germans from 1st edition mid-war and fancied something a little different so decided to go for the British and as my grandad was in the infantry I decided to make them Italian veterans however only after getting all the bits and bobs sorted out did I find out that he landed at Anzio and fought in operation shingle, I really want to find out to what extent his involvement was but don't wish to make him re-live some of the horrors of what he saw so a real catch 22 situation...

anyhow I asked one of the lads to come up with an army list for me as I'm shockingly bad at doing FOW lists and this was the following for about a 1000 points.

at first I was a bit undecided about the list but as I read through the turning the tide book the more I like it the mortars along with the AOP get to re-roll on the first ranging in and on the third ranging in! sounds super cheeky to me ;)

so in the usual "Anton" way I decided to paint all the cool stuff first them do the boring infantry company last!
The pictures might be a bit iffy as my camera decided to run out of juice so these are taken off my phone 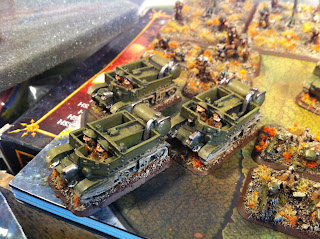 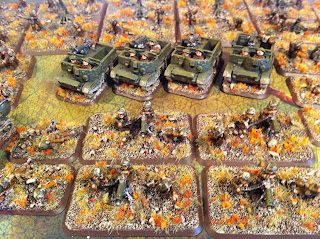 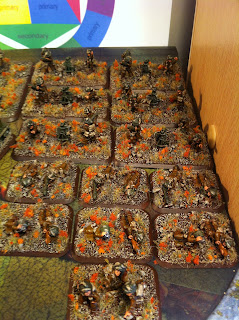 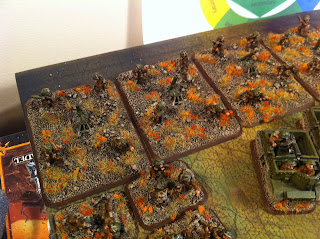 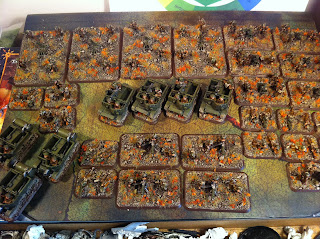 so not bad for a couple of weeks work so far just the finial push with the six pounders, AOP and the infantry company and the jobs a good un! then expand the army to 1500, and 2000 points and I've a finished army something that I don't think I've ever achieved?

I also decided to treat myself I saw Dustin at the shop had bought a new lamp for the painting table and after playing around with it and all that decided to get my hands on one, 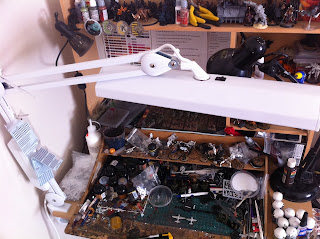 Now in a real super-geek way I was actually quite excited about this and to no surprise my other half really wasn't interested so I didn't mention how much it cost...

If your interested have a look at www.chronos.ltd.uk now depending on how much painting you actually do will depend if you can justify the price, personally I thought screw it the lamps that I've been using are well over 10 years old and well why not ;)

The pledge is looking nice and healthy this month with being in the black and making up for the shortfall from January with the Napoleonic stuff and the usual model frenzy of Salute will no doubt push the "machine" into overdrive as Hail Caesar is looking like its gonna happen which nicely flows into...

I've got a "how to" coming up that involves crazy bearded men with swords and army dip, so keep an eye out if you've always wondered how it works and what a complete noob can do with this stuff..

So all the pieces had finally come together...

And after sending an invite out to the guys at the club I had my first game booked in....

Now normally I'd flick through the rules prior to the game but I've not really had the chance as I've been more interested in painting and the like,

So I went into this quite blind to be honest,

Most of the missions are scenario based and after a quick road trip with one of the guys to Spirit Games I picked up the battle of Britain scenario book and decided to run with the first mission out of that, 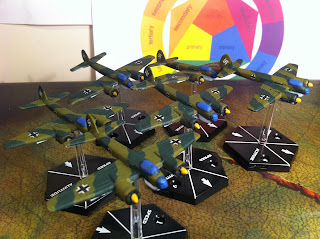 so 6 medium bombers to escape the clutches of the RAF.. 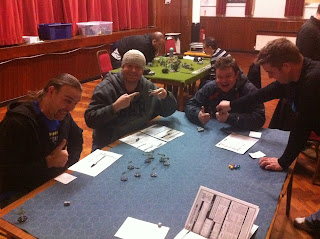 And a fine bunch of chaps these lot are....

Now the first 15 mins or so were quite interesting as I read like a madman and sussed out quite a lot early on with regards to movement and plotting, and when it got to the shooting then it started to heat up, as I'd mis-read the mission I set up the bomber formation in one of the corners of the table assuming that I needed to get to the other corner, but after looking at the mission afterwards I discovered that I was miles outside of my deployment zone and it should have been width ways for the running bombers! oh well!! 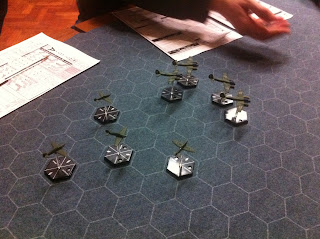 two bombers down and the competition heats up as who is gonna get the next kill!!

So thoughts on the actual system...

There are bloody loads in the main rule book 15 missions and a mini campaign with another 4 but as its an American chap that has wrote them its alot of the yanks up against the Jap's so not a bad thing but with picking up the Over the Channel add on it gives you 18 missions to play out and there is still another 3 books that you can pick up to date so a shag load!
The mission set up is nice and easy and gives you exactly what you need to field for each one, if you've not quite got enough models then a bit of jigging about and you'll be sorted.

If I can get the actual players to be working out the maneuver & turn types within 15 mins then anyone can play this, hell at one point I put the reference sheet in front of a couple and they were telling me what I needed to roll, there are some really cool bits within the rules and as we was only playing the real basic's left out tailing, weather, formations, AAA and the like, as I've tried wings of war and the forgeworld Aeronautica Imperialis these rules wipe the floor with both! Infact I'm thinking of hashing the CY6 rules for the forgeworld models.....


It went down a storm! it became very entertaining very quickly as people are trying to out maneuver each other for the kill shot, and when being fired upon you get cheers and groans from the players as I tried to get the bombers off the board!


me personally I've worked it out to cost me (so far)


now put that into perspective that a unit of the the really pretty shiny gray knight terminator's are £27.70 for 5 boxes you can have a whole new game with enough models for four nations air forces and the average model will cost between 60 pence and £1.10 personally its a bargain!


I liked this alot and I've a feeling that I've only just scratched the surface with regards to the rules, myself and the guys were already talking about picking up the jet age version, this one is a keeper in my eyes if your on the fence with regards to getting it or not take the plunge and do it!!
Posted by Anton at 01:38 4 comments: 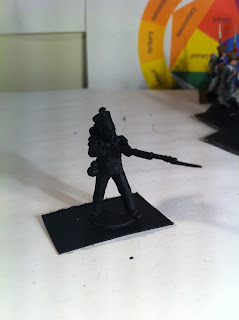 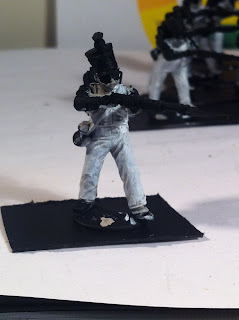 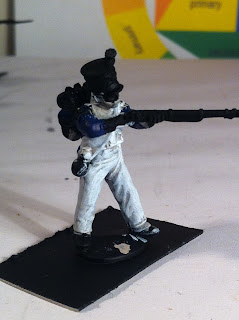 Rough drybrush with white, I'm using a game colour white at the moment 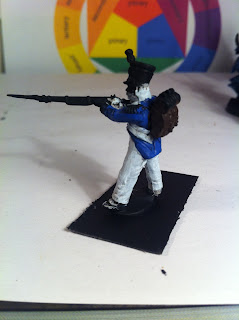 Regal blue basecoat for the coat and highlight with ultramarine blue over that. 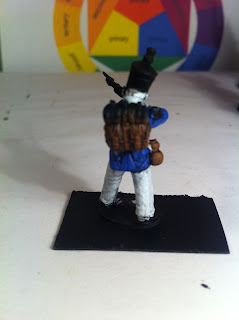 Scorched brown and graveyard earth for the pouches and rucksack 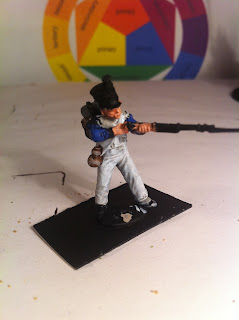 Kommando Kharki on the remainder of the pouches & rucksack, dwarf flesh on the skin with a bit of white in there for the highlight 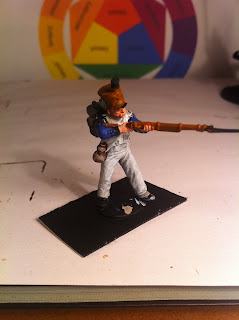 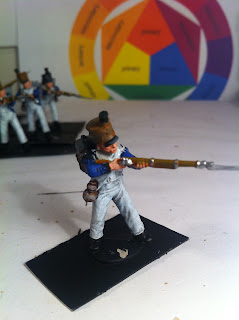 Snakebite leather on the rifle then pick out the metail with silver, and graveyard earth on the shako cover, codex grey and then fortress grey on the roll onto of the rucksack, 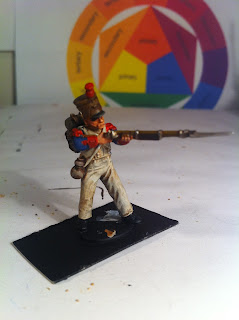 Black on the shoes and the rim of the hat, bit of red on the pom-pom bit and shoulders, blast it with gryphonne sepia and wait for it to dry 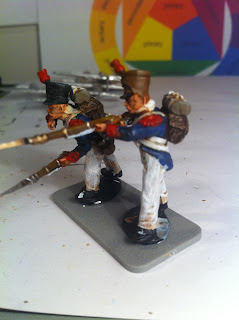 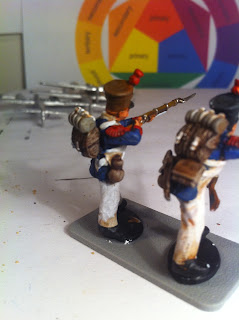 pick out the white on the trousers and the straps etc.. and stick the model to a relevent base, now I've seen some people do them as individual bases but when your fielding units of 32 I've gone down the route of 4 to a base, and these guys are going to be part of the skirmish screen that each unit employs OR a small skimish unit to harass flanks etc.. 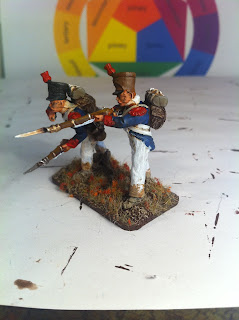 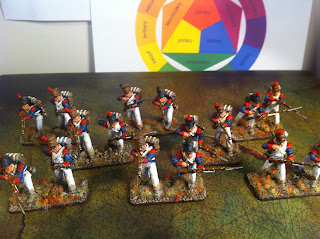 so the whole lot that I did at the same time, I've only a few infantry units left and then I can start cracking on with the Cav that I picked up last month,

Saying that I'm looking to pre-order 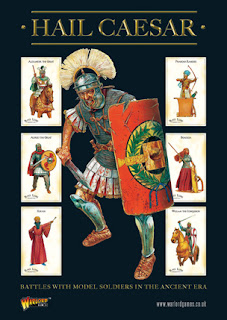 so once the army deals go up on the warlord website I'll then order a small force as a bit of a starter...

I've a feeling that my "pledge" will be achieved this year but with the largest volume of figures painted that I've ever done!
Posted by Anton at 13:54 No comments:

Well I've decided to jump on the band wagon and put some of my old posts that are buried within the archives...

I've done two selections, one for most page view and one that brings back some cool memories

So the popular ones first...

no surprise on this one with a whopping 4,000 hits and rising...
Dark eldar venom conversion guide

but my personal favourites...

so there you go enjoy!
Posted by Anton at 23:46 No comments: