March Maddness! The round up

Well so much for a mid-month update,

So have I been up to?

Well as predicted the zone Mortalis table took most of the month to complete for Chillcon, this was the Third year that we attended as a demo team and the show is certainly growing from strength to strength with each year. If you are able to get to either the Sheffield or Derby locations its well worth the visit!

go have a look at the website and if your part of a demo team or even a trader tap the guys up!

So the table went down really well with the masses and as a first attempt at something like this it was a massive learning curve!!

The GC helping me with the base of the table

quite a bit of time was spent on this part as the drying and filling of the gaps took longer than I expected,

I considered air brushing the colours however for speed and cost I went with rattle cans for the initial undercoat of black then followed up by a metallic car body spray,


whilst that lot was drying I got to work on the walls, all 56 pieces of them! As I printed out the walls over the course of about 8 months on and off they were slightly different with regards to quality as I worked out the printer, so I brushed acetone onto the walls to dull down the print lines and over all came out reasonably well.


so with the walls all sorted it was one to the long slog of base coat, first metallic coat and then onto the highlight, detail, wash and colour wash!

however part way though the painting I'd arranged a game against Dave at the club and figured it would be the perfect chance to try out the ZM stuff within kill team.

so after I duly got my ass handed to me by the Thousand Son's  it was back onto the board!

in a moment of inspiration from Chrissi I did black and yellow hazard stripes on the areas where the doors would close and thought that's the 4x4 sorted! 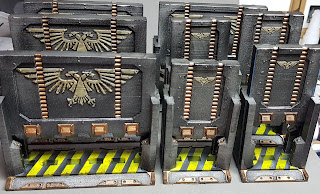 however it wasn't to be the case, despite sanding and shaving the edges down after I applied the paint they were just too tight for the frames, so back to the printer it was but not in time for chillcon.

the beast! Its been an absolute workhorse! buy one if you've 900 quid burning a hole in your pocket!

so Prior to Chillcon, I had a couple of guys who were willing to try out the mission that I was planning on running.

Massive Thanks to both Kurt & Luke the feed back and lessons learnt that night was spot on!

So after the test run it was just the matter of running the game with Keith and Dan and I owe massive thanks for the help on the day it was great fun and between us we ran a fair few games,

So lets get down to the nitty gritty of cost!

If I was to buy a legit 4x4 ZM board from forgeworld as as individual 1 foot square tiles total cost would be about 464 quid depending if you went for the blank tile that costs 24 quid, however if I bought it in 2x2 bundles its 400 quid but if I decided to go ball deep and go for the 4x4 bundle its 450 quid....

yea I'm thinking the same as you now, the marketing dept needs to suss out what they are doing!

So going on the basis of the material costing 2 pence a gram, including the MDF the total material cost is 164 quid for the 4x4.

However the real cost is time, example is that a pair of corners would take about 20 hours to print and I did 23 of them so about 230 hours just on those bits alone!

on the flip side now I've got my base 4x4 down I can start adding to it and with the walls being separate storage is really easy.

So apart from the ZM board what else have I been getting up to you might ask??

well with Salute this weekend I've been helping Phil with some finishing touches on the This is Not a Test demo board and I'll get some pics of this posted up once its all together on Saturday along with all the pics and a show report.

So apart from painting a lot of metallic the other odds and sods I've managed to get sorted are...

a quick imperial guard kill team for 40K, this is for a up and coming demo night and the start of a campaign that I'll be looking to run later in April. So if your in the Leicester area come on down and give it a crack!

other stuff has been another unit for blood and plunder, so I'm slowly making my way through the units that I've picked up.

and with the campaign entering month three the natives are slowly getting sussed out and I'm liking the play style!


So lets have a look at the score on the doors!

so a cracking month painting wise and with the 2 big projects out of the way I'll be starting a 30k nightlords commission so that should be something different!

I've a couple of odds and sods that I'd like to get done, one of these are the world eater bits and depending on how the month goes I might take the plunge and to the huge drop pods!!
Posted by Anton at 13:55 No comments: