So its been a while since I've last updated the blog so I'll keep this one short and sweet with regards to the Pledge for April..

so normally in April the pledge takes an absolute battering due to going mental at salute however this year was a little different!

Painting wise I did some Rebels for Star Wars legions, a load more necrons for 40K and Big Joes' first batch of his Cygnar army,

So starting off with my love child that has completely escalated out of control my necrons! 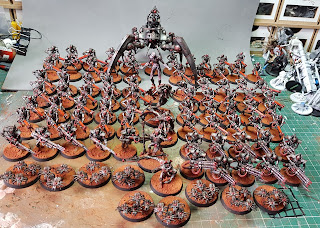 This is just the painted stuff, bear in mind that I've "acquired" 4 sets of the forgebane box set so have a tone of wraiths, immortals and guard to plough though add on a couple of units that I got from forgeworld its clocking up to about 4k even before I've added in the cool toys!

However I think I've sussed out how to do metal.

So onto the flavour of the moment Star Wars Legion! 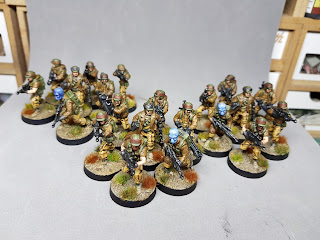 With every man and his dog going empire I decided to go against the gain and go rebels, so a quick and dirty paint job on this bad boys and they are good to go! I just need to splash some paint on Luke, the air speeder and the 3 at-rt's and its all peachy. Then the long waiting game comes for the next lot of addons from FFG.

The first batch of Joe's warmachine stuff, I figured that I might as well get the boring bits done first then realised that all of it boring ;)

So that's what I've been up to for the last month(ish) not my usual standard of pumping out models and the like but I've so much RL stuff going down I'm trying to keep everything balanced.

As always ta for reading and take it easy!