Staying on point - The Pledge Feb!

Well the month of love is done!

That's what it must have felt like for Kurt as I played two games against him one with the armoured list and the other with a mere 120 tactical marines armed with bolt pistol and chain axes (lots of proxies were going on!)

So I finished off the Predators for Squad number one, 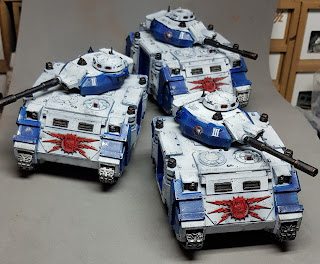 I used the same colour placement for the command rhino and kept the extra armour in the same theme on the turrets. 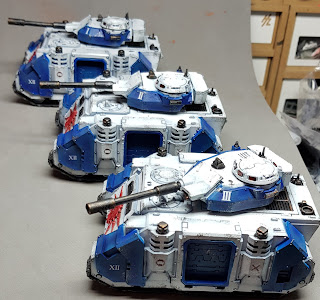 The sponsons will follow at a later date as I've something in the pipe line but I'll probley end up doing all 18 at the same time as I need to cast up the housing that I'm looking at using.

So with the first unit of predators done and dusted, it's onto the other bits of the armoured spearhead that I've got kicking about in the form of the command tank and 2 of the 3 vindicators that I've recycled from my 40k chaos army that I never got round to painting saving me 60 quid!

So the basic airbrush colours are down so its now onto the brush work.

Which I'll do at the same  time as these pair, I should have painted the models in the squadrons however I can pick up a 3rd vindicator at some point in the future,

Now I know that I was going to work on the 2 huge drop pods however lets be honest, I couldn't be arsed! Yes that's not the right attitude to have towards the final steps towards finishing my army but I need a good chunk of time just to mask up the pods and they'll get done but I need to clear a big area off my painting desk and that's a task in itself!

So what was the final score for Feb you might ask?

not buying any models in the month was no mean feat! the budgeting that I'm trying to stick to is kinda working where I'm not simply going buying lots of random stuff like I would normally.

So onto the month of March, I'd like to get the sicaran and 2 vindi's done, some more natives for  blood and plunder, however most of March will be taken up by the painting of the zone mortalis board that I'm taking to chillcon with the phosphex party chaps, so I'll be breaking out the rattle cans as well as the air bush for that bad boy!

Keep an eye on the facebook page for WIP updates.
Posted by Anton at 22:43 No comments: