30K 13th Legion the Ultramarines continue on the march to war!

Way back in March I showed off the start of the 13th Legion and I've realised that I've not done an update on these on the actual blog.

I've been posting the odd pic on my facebook page which seems to get more interaction than blog posts but that's another subject for another time!

So what have I been adding to the 13th?

well a 10 man assault unit was thrown into the mix for some fast moving cannon fodder, 2 command rhino's as well as 3 rhino's. The biggest add on to the legion is a deredeo dreadnought with lascannons for some anti flier action and because I don't do subtle I've gone for a talon of leviathans! 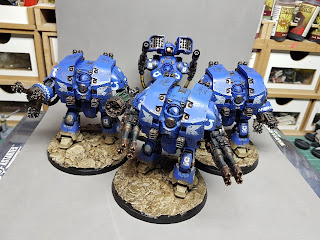 These bad boys come in at a mere 910 points with out the armoured ceramite, costing more than a warhound titan! however I've faced these a couple of times on the field and they are a pain in the arse, however three of them I'll be making no friends with these so it'll be maximum cheese lists only! 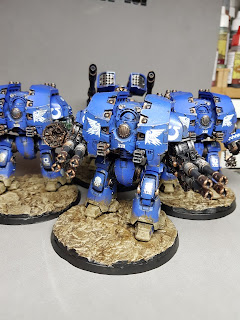 I've gone for 2 storm cannons that should take care of those pesky power armoured chaps and will cut through what ever is stupid enough to stand in front of them! 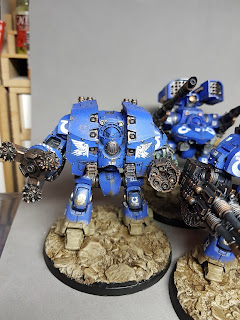 I've gone for 2 of the dreadnoughts armed the same with a siege drill and a grav flux, 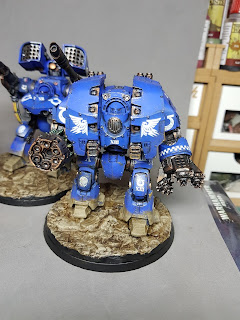 and onto the deredeo, this will be the focal point of my anti flier part of the army who can also fire ground based targets if needed. 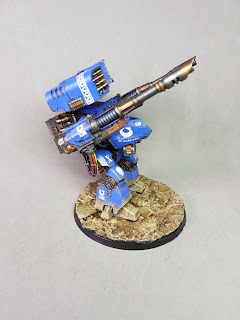 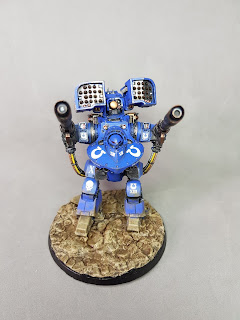 over I'm really happy with how the army is looking at really need to sort out a game with what I've got painted so far, 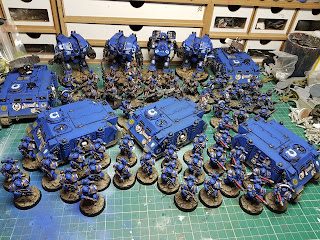 I've only one more element to finish off for the 13th and that would be a breacher squad with a landraider transport keeping in the theme of the whole army being mounted.

Roughly this is about 3500 points so I could stop however that's not going to happen!

Once the breachers are done its the question of what to add next? I'm tempted to get a 6th  troop choice and then start looking at some fast attack choices as I've not seen alot of local players using bikes, jet bikes or landspeeders.

any thoughts on the above?
Posted by Anton at 14:00 No comments:

A couple of weeks ago I decided to dip my toe into the torney scene and played a 4 game 1000 point 40k torney.

I wasn't expecting to set the world of fire as my list building thought process consists of "oohhh that's cool" and build an army around a certain type of model or theme.

Overall the day was fairly good no real hassle with regards to rules and the like certainly need to play more of 8th and it hasn't put me off, in fact fuelled the fire with regards to GW stuff and I'm looking at factions and themed lists that I've not looked at for a long long time!

For this I decided to take the wraith guard and that would involve actually getting some more of the bits and bobs done.

So  after a few sessions locked away from the GC I managed to crack out the following... 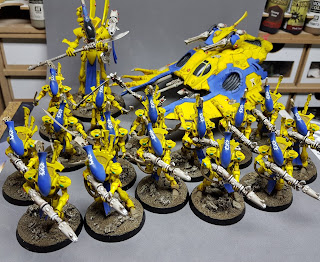 however I'm still playing catch up with the Eldar and due to the fact that I was doing blue on the wave serpent and had some left over I used the spare paint to get some base colours on the ultramaine bits I've had knocking about for a while. More on that when I've finished them off and done so other bits and bobs,

So some close up pics of the wave serpent, this was a challenge for myself with the big smooth surfaces as well as the main colour being yellow, 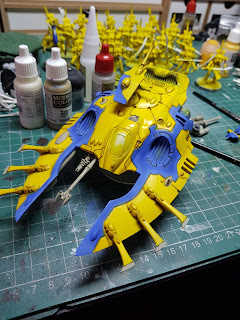 after some trial and error I managed to get it locked down to a point that I was happy with, 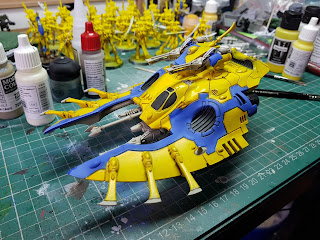 I decided to go for some weathering on the model something that I've done on plenty of imperiam and ork models so I figured lets give it a crack on the wave serpent and it came out really well. 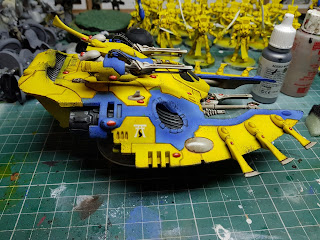 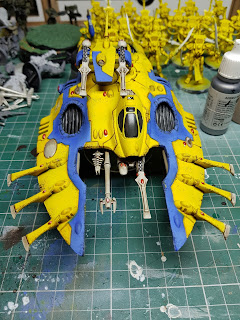 you'll see in the back ground I've a fair few more wraith guard to crack out as well as a second wave serpent I also might have picked up a wraith knight.....

July - the month of child care and crazy antics!

so as well as the blood & plunder models as well as Joe's warmachine I did a test paint on some striking scorpions and finished some random models that I've kicking around for a while.

These I picked up from the Dr Who range from warlord games ages ago and only after starting to watch  the new series of Dr Who did I come across the Silence and I think they are great bad guys so another couple of sets and that should give me enough for a skirmish force just need to actually play a game! 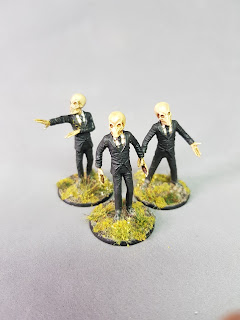 these are the robots from White dragon that I picked up way back in Feb at Robin, designed for a 15mm sci-fi system I'll be using these for this is not a test until the White dragon rules hit the streets. 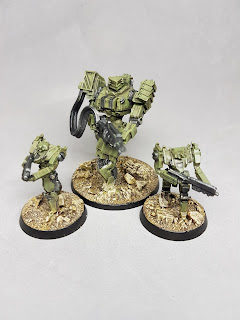 and that's it for the mean time, I'll be continuing on the 13th Legion and trying not to buy more random 40K stuff!!
Posted by Anton at 10:48 No comments: