Well as its the last day of 2009 I figured I'd have an update and think about what I've done this year,

So the update part first, The 1st Fire Prisim is done par the decals however the golden question is... should I put a few tradtional black lines on the hull?
I'm in two minds if I should as it looks quite nice and how on gods green earth would I do a straight line? 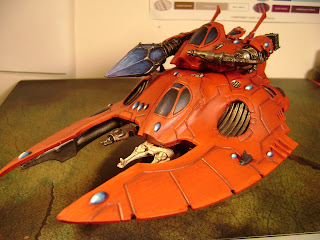 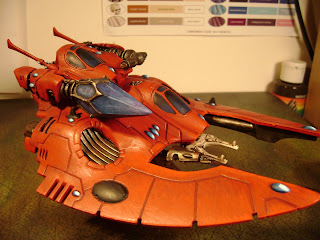 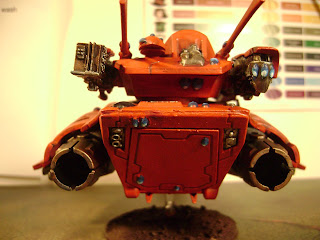 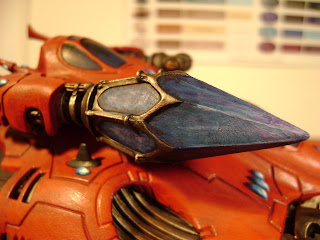 And the last squad of the jetbikes, just some cleaning up to do on the red where I've been sloppy, the spirit stones and the decals to apply and the job's a good un! 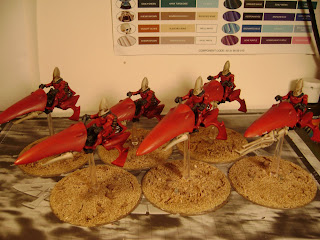 So thinking about what I've acheived this year?

Well the biggie has to be the warhound! I'm still impressed I managed to get it painted and not be doomed to a half finished project! (like the chaos mamonth many many years ago!)

Doing over 2k's worth of nurgle what started off as a "objective" squad for the thousand sons has became its own beast on its own! including the worlds most expensive landraider!

The phoniex from the flames aka the Eldar! I've had these guys for a long long time!! and only when I asked one of the guys what would he like to play against did Saim Hann get considered, Ok so the first game was a white wash but with a little reading and talking to various people I've kinda got them sorted I just need to push them upto 2K so that I can play a good size game with them,

Warmachine, I've not played this system for such a long time and the local shop running the torney and finishing 3rd was quite good, I just need to plot my revenge against the 1st & 2nd placers ;)

And Whilst we're on the warmachine front finally getting round to getting some of the cryx painted! I need to make a huge dent in that pile of unpainted lead!

Ambush Alley, I managed to pick up the main rules all the way back in March from Salute and get most of the 15mm fellas painted for both the British Army and the insergents,

And last but not least my final year as chairman of the Phat Cats, after 7 odd years I've decided to let some else have ago at it, however how will I get my scenery fix now!

Hope you all have a nice one tonight and See you in the new year
Posted by Anton at 11:06 4 comments:

Well so far I've managed to stick to my no toys till the Eldar & Chaos are finished how ever I did splash out on some new brushes I saw a review by the guys on beasts of war via you tube and they seemed quite good, So when I was down gifts for geeks I asked Ross if he could get them in and they've been out for ages! 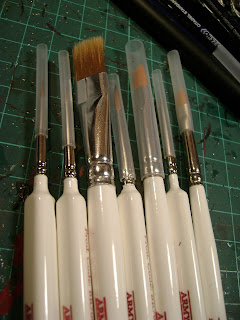 So Far I quite impressed with them, so will replace my aging winsor & newton brushes nicely

I've been quite productive on the eldar front and finished off the Seer Council, I've spent a little longer on these guys than the normal jet bike guardians and they alright, not too sure about the weapons but they'll do in the mean time, 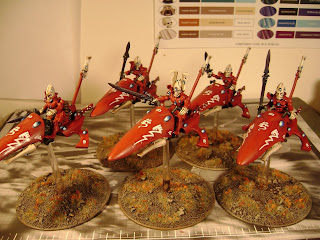 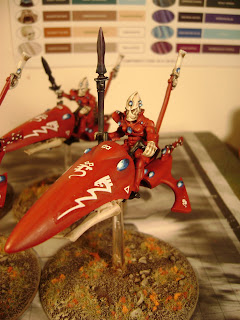 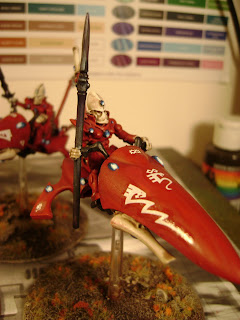 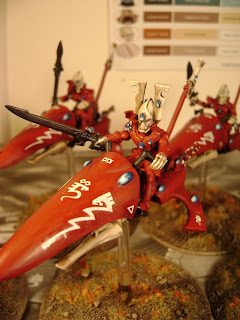 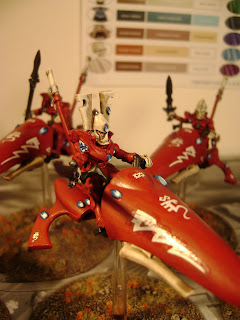 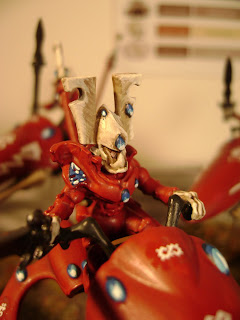 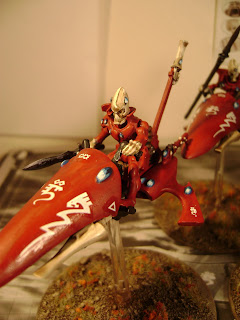 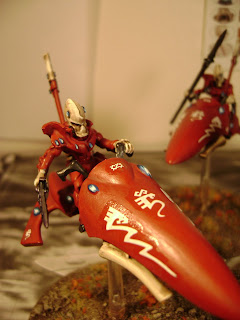 So with this lot done the eldar now have left...

so not a great deal left really, I'm going to hold fire on getting any more bits and bobs for the army for the time being as they are an alternative to the chaos boys so won't be used a great deal really.
Posted by Anton at 16:05 1 comment: 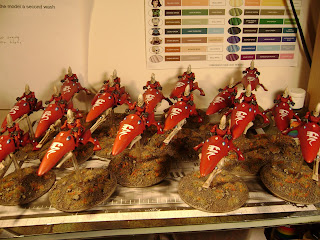 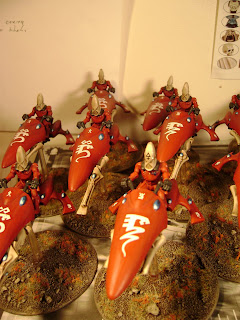 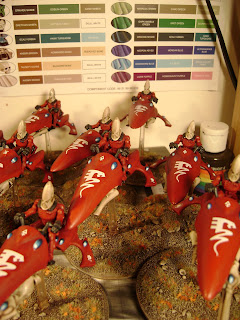 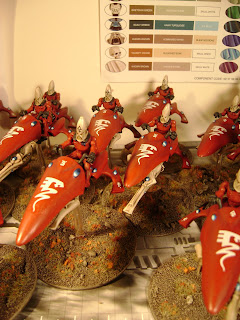 Now there is one missing I dropped the box with the flying bases and one of them broke so I'll have to dig about for a new plastic stem..

so I've decided to crack on with the seer council the last squad of jet bikes and a fire prisim that should keep me busy for a couple of weeks! 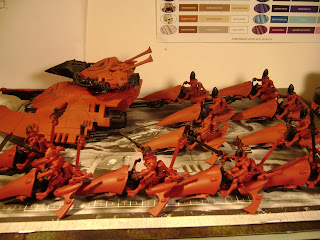 I've also decided to splash some paint on me cryx now going on how long the last lot took me this should be a walk in the park!! assuming I get time to sit and paint with all the festive drinking that'll be kicking off next week (after payday of course!) 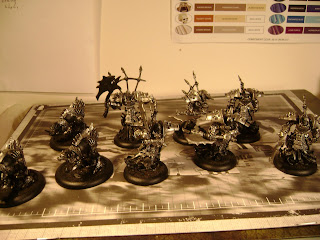 and I found this whilst looking around on my painting area, a tzeentch lord I converted a while back but never got round to painting so I'm gonna get him finished off!! 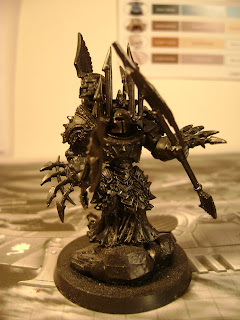 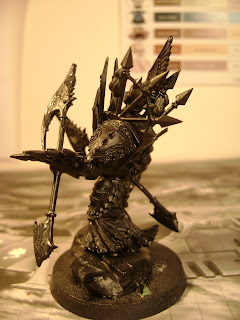 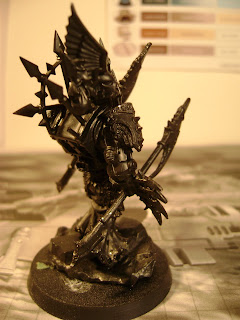 Must Resist the resistance.....

Well after sundays fab warmacine torny at gifts for geeks I've the love for the cryx once more!

I suppose the amount I painted in a such a short amount of time helped as well and they got quite a few "could I have a look" comments which always nice,

I even popped down to the new warmachine Wednesday and played a quick 450 points against a really nice chap (name I failed to find out) with his troll bloods, as he'd only been playing about a month I didn't wanna use the skarre bomb on him that would have been total filth! so I took the warwitch and and some odds and sods, I also got the chance to field a pair of pistol wraths that I've had for ages but never done anything with!

So I've splashed a bit of paint on them and all I need to do is base the little monkeys and the job's a good un!

I've also decided to try and finish off SHOCK HORROR what I've got for the following armies....

Now this is the intresting part I'm going to TRY and hold back on buying anything until these bits are done! With the looming nid codex coming up this might be a problem! however lets see what I can get banged out in the meantime!

I'm gonna crack on with the 12 jetbikes that are "nearly" there then see what takes my fancy after that!

So the Pistol Wraths.... 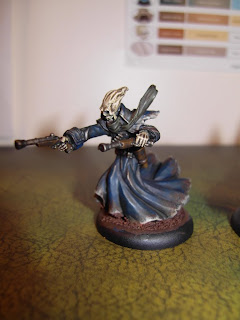 I tried to keep it quite dark as the army as a whole is basicly undead i.e. not nice people! 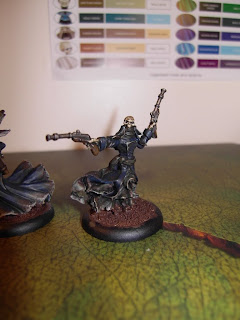 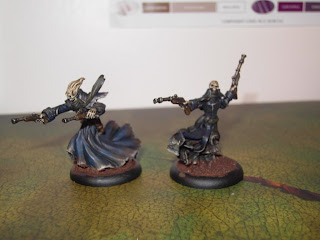 I started these on Monday night (I think) and got them done quite quick, they look good for table top and I'm happy with that!!

Stay tuned... Can Anton stick to his guns and resist the urge to buy more models?
Posted by Anton at 13:44 2 comments: