well it was bound to happen at some point...

A new system, a new scale, and some more metal to paint!

now the reason that this has come about is a new guy at the club wanting to do some modern warfare gaming which I'm well up for!

so the order from magistar militurn thudded onto the door step and after some rooting about I got my T90's out, first thoughts where "fuck me there small!" and the following photo gives you an idea of a GW metal rhino compared to a GHQ T90! 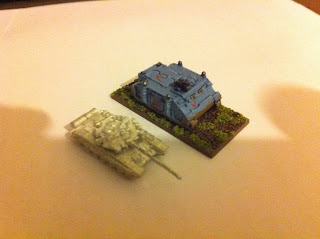 so after a bit of thinking I decided to stick the T90's to a small flames of war base, looks about right for the size and as I've ordered cold war commander we'll see what is recommended within that system, 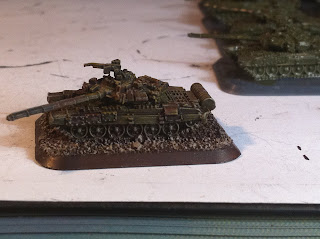 now its not too bad, an I'm sure some one is bound to comment that the camo is wrong or something like that! 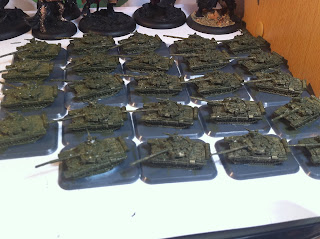 right at the top of the picture they are medium warmachine based models so gives you an idea of the size, I've not even bothered undercoating these guys as the detail on the models are superb for the scale and didn't want the spray getting rid of any!

now I figured the trick with these guys is to over highlight the green and use a lighter brown for the camo, and wash with devlin mud? then when doing the base do a really light dry brush of commado karki?

so as we're playing on thursday I'm planning on banging out this lot no later than wednesday!

assuming that tower madness on my iphone doesn't distract me to much!!
Posted by Anton at 00:49 1 comment:

More Skorne & something a little differant....

So with my new found passion for Skorne the 35 point force is coming along nicely, this week I've managed to get the pain givers and the pain giver grand master flash turntable tormentor done as well , I slipped the second agoniser as well and I'm about half way though the warlock Rasheth aka FB.

The pictures are a little poor this week as one of my bulbs went and I've not had the chance to pick another one up yet, but one with the shots

so the grandmaster flash... 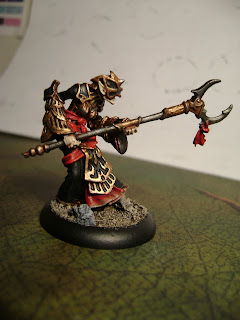 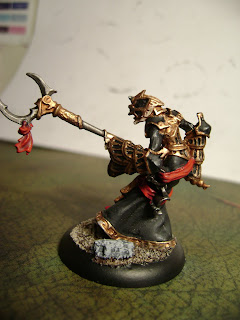 really enjoyed painting this model, nice and simple and the alternative colour scheme works really well on it, 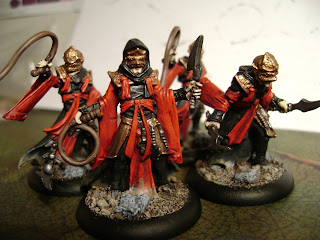 basic pain giver unit, the red has come out a bit LOUD! but in real life they look pretty good to me! 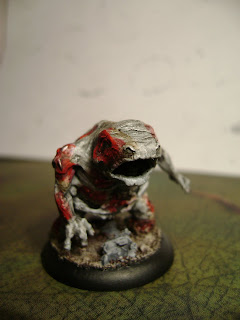 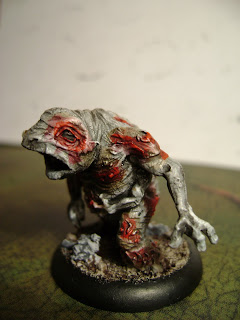 The second agoniser, Ross mentioned the other day how the first one looked "wrong" not in a painting sense but as in an abused why, well that's mission accomplished! ;) 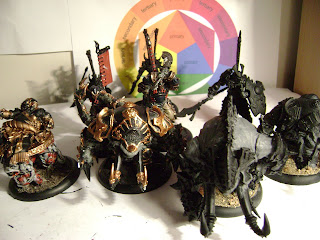 so this is whats left....  the Cyclops's are my original test models ;)

I'm waiting on the Crocmen to turn up and once I've a few games under my belt then I'll increase to 50 points, but I'm really tempted by the immortals, the guardians and the new special guy though....

now the something different is to do with a game that Dave wants to play, he sent me a text a while back seeing if I'd fancy playing Dr Who, now I'll be honest I was a bit humm... "ok" at first but after a little thinking I thought bugger to it lets give it a crack.

Now it turns out that you can have UNIT which is basically normal military guys, I then remembered that I've some 28mm modern Russians kicking about along with BMP so after a bit of digging I found them and decided to crack on with what I've got,

Well it turns out I've more than I remember so Coops is bring some bases for me (metal 25mm penny washers) so that I can get the rest sorted, 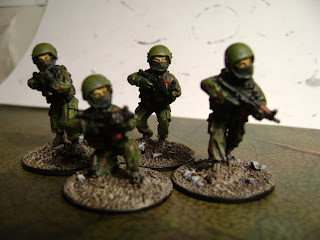 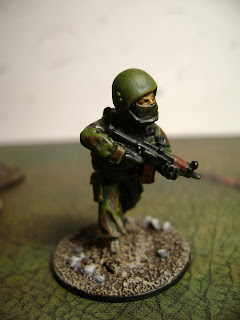 So these are from the assault group and are the MVD with aksu 74's but I'll just use them as an urban assault group, spetnaz or what ever they look cool and that's good enough for me,

Painting these guys was a step into the unknown as I've only done "real" stuff before in the form of flames of war and that was 15mm so pretty easy to get it looking nice, these being 28mm I just winged it really and I'm happy with the finished result,

now previously I've stated that I'm going to be cutting back on the systems that I play etc... well that's gone out the bloody window already!!

A new chap has come down the club asking for play testers for his home grown rules system, in 6mm! so epic scale now I've had a mooch about and the models are bloody cool! and yep I've claimed the Russians already!

so once I've got the shopping list from the rest of the guys it shouldn't be long before loads of little T90's are on the painting table!
Posted by Anton at 10:35 No comments:

Hordes Skorne & a blast from the past!

Its been a bit of a slow month as I've not really painted much (well for me) I had a couple of games of warmachine last week and got my ass royally handed to me, which has only made me more determined to break out the "Inner Anton" and get my game face on,

I'm stepping away from the cryx for a bit as I've become a bit bored of them and going to focus on my skorne, now I've not really played as a horde player plenty of time against them so it should be something that I can look forward to and hopefully enjoy and try and win a few games!

so I'm going to run with the following 35 point list for a couple of games to see how I get on with them, now the idea was planted in my head by a fellow warmachine player who has a knack of coming up with filthy lists...

Agonizer x2
Paingiver beast handlers (4 man unit)
Paingiver task master
Gatorman Posse (3 man unit)
Totem Hunter (it wasn't until stef asked if I could have a totem hunter in the list did I check! well I can have units but not solo's, so I've 3 points spare!)

so its about as subtle as a brick in a handbag the chain gang theme really pays off at 35 points with 3 titans! both agonizers fully loaded with fury and an extra 2" deployment with the three titans, the gatormen get +2" movement on there first turn and the totem hunter there for a laugh! see above!

so I suppose the question is what would you do for a 35 point skorne list??

so I painted these guys up that I've had for a while is the best way to describe it! the colour scheme was suggested to me by Spencer a while back and I really like the contrast rather than the usual bright red of the skorne, 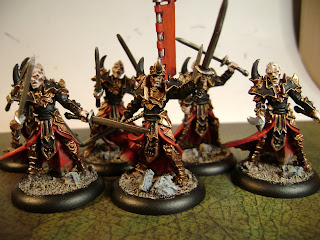 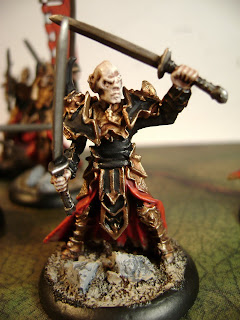 and I also decided to paint an agonizer... 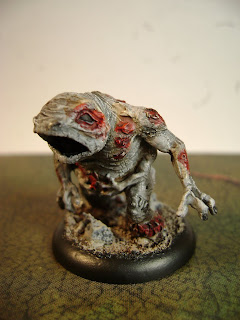 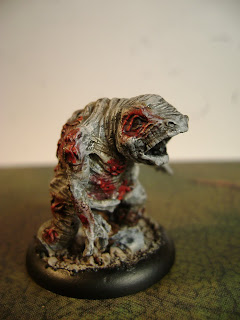 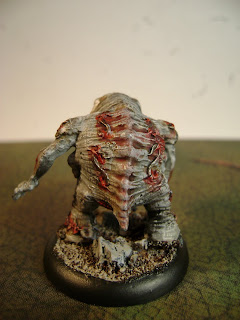 I wanted the model to look well abused and this is where the washes really came in useful with giving it a grimey look and bloodied as well...


The Blast from the past is a case that I found whilst decorating the nursery..... 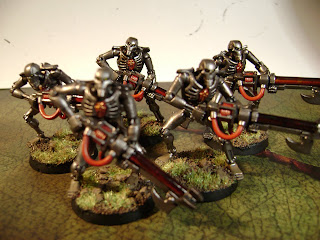 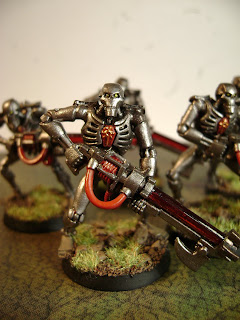 now these boys are really really old! working it out via the medium of ex girlfriends/nutters I'm guessing at about 8-9 years old? I remember I was working for GW when I had these and the Phat cats club was at the original venue. I suppose these will come out if and when the necrons get a revamp....
Posted by Anton at 23:33 7 comments:

I hadn't realised that the Blog is just over a year old which means Bob the Warhound has his First birthday on the 21st August!! it only seems 5 mins since I posted.... gentlemen start you engines how time does fly!! at that point I had about 5 followers now I've swelled to a whopping 41! so thanks to all of those to take there time to read my random thoughts and leave the comments for me to think about,

Well I've finally got round to finishing the seekers off,

I would have had them done alot quicker had I not ran out of ink and then spent the weekend on a stag do in London, I decided to take them down the shop tonight and crack on with them so that I couldn't get distracted by other things!

so here are the finished models, the lighting isn't great on these pictures I thought I'd blast a few snaps off,

So the complete unit... 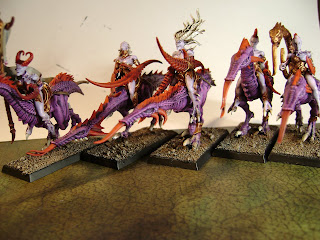 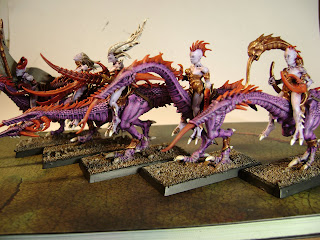 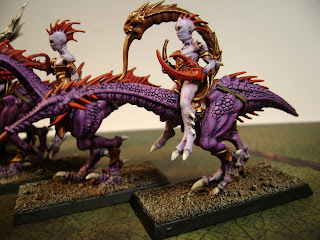 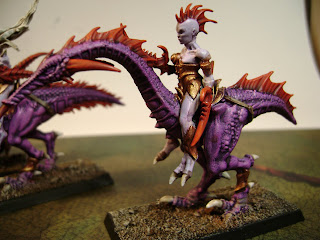 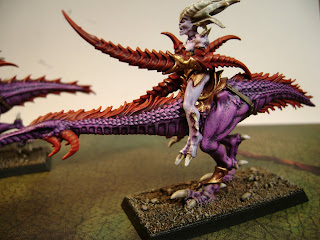 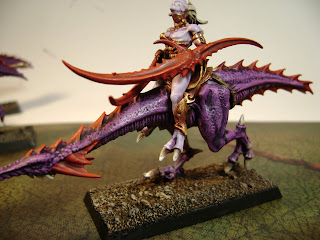 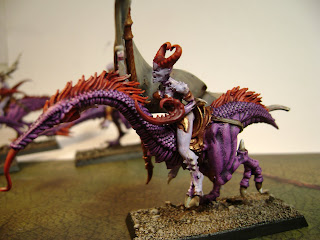 I didn't do anything with the banner as I've never been any good at those so I figured it'd be better blank than some 3 year old with a brush attacking it!

at the moment I'm in a bit of a painting crossroads i.e. can't decide what to do next I so he's a list of options that I'm thinking about....


So many choices so little time!

I saw the new deamonette seekers and loved em, superb models and all that jazz..

Now when I bugged Ross at the shop about who was going to build and paint them Jack's name came up.. now he's a nice lad but one of these guys that never really finishes something the classic "oh thats shiney, drops current project starts new one" gamer.

We've all been there at some point in our gaming lives so no worries, and he got as far as sticking the seekers together and they've been sitting on top of the display cabinet for the last week of so, until now!


so now I've these little monkeys in my grubby little hands they'll be done "shorty" I asked Ross when did he want them doing for, ASAP was the answer and Spencer mumbled they'll be done by the end of the night, well maybe if they were undercoated!

I've also decided to start work on my black templars, and figured I needed a test model to paint so it might as well be the special chappie high marshall as most of his armour is a bronze/gold looking scheme, and not that much black/white so should be easy to practice on.

Now I've taken two sets of pictures to convince a fellow gamer that basing your models makes a huge difference on the finished product.....

So I know which one I prefer and maybe this is a unfair question as the model has gone from plan slotta base to nice shiney dragon forge resin base.... 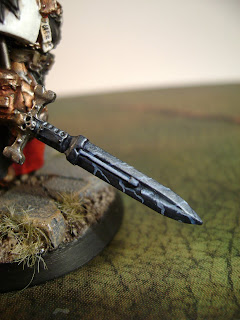 Close up of the powersword,

I'm not 100% happy with this though, any suggestions on what I can do to improve this??