One of the chaps at Phat Cats has been threatening to get a Blood and Plunder campaign kicked off and in a flurry of action the campaign is now kicking off this month,

To make the campaign as varied as possible the usual suspects at the club started jostling for the factions and unsurprisingly I nipped in claiming the natives as soon as I found out.
This decision was down to the fact that I have “acquired” three of the native starter sets and with burning some demo credit that I’d built up I’ve also got managed to bulk out my no peace beyond the line initial kick starter pledge with a small fleet of Canoas and a couple of Piragua’s, so giving me:

Throw in King golden cap and the normal commander that’s a mere 74 models! So much for a small skirmish force!

Now as I really enjoy the boats and the sea missions it would be rude not to make sure that the Tribe of Té Ta can get around. The young warriors and Warriors are all in Canoas and the muskets and African warriors get to ride in Piragua’s the comedy factor part of all of this is with the Piragua’s they can have a light cannon strapped to the front. So envision my bunch of crazy locals paddling towards huge ships with only 2 light cannons in the entire force and me humming the Hawaii 5-0 theme from the 70’s I’ve found the “Ork” faction in blood and plunder!
Anyway enough of the whaffling time to show off what I’ve managed…

Now after putting up the picture of the canoa with the pattern it sparked a good healthy debate with regards to that time period and what would have been “right” however the overall feedback was the pattern was a winner and it was the GC who gave me the idea to draw on the model with a thin sharpie pen to the point where I’ve got the GC to design me some patterns and I’ll be using them as a homage in years to come.

One thing that I decided to was varnish these guys as the Spanish took a beating and the paint was getting chipped from use, however considering that they have been all over the place I’m quite happy that they have survived so long and no bits have broken off so that’s a good testament on the quality of these models.

Normally I use army painter varnish and that has produced various results in the past, however I decided to shoot some varnish though the airbrush and see what results that I could get from that, now most people would just do the one model in this situation but not me I went for the whole lot in one fell swoop and the initial coat of gloss went down great, maybe a little too good!
I then went back over with the matt coat and the gloss was still coming through in fact I did 2 coats of matt and still no joy, at this point I was a tad panicky as I didn’t want to strip the guys and start all over again!

But I went onto the wargaming airbrush page and poised the question with what I was going through and got various suggestions with solutions one of the weirder solutions was to use a hair dryer on them, which I need to give a crack! But the one I went for was simply using some Vallejo matt varnish brushed onto the model and that did the trick, a bit of shine is still present however they look far better than they did previously.

The next batch that I do I’ll try the matt varnish direct and bypass the gloss and see how that comes out, So watch this space for adventures in varnishing!

Its not been all semi naked blokes with bows I’ve been hitting the huge pile of unpainted resin that I’ve got in the geek room so I decided to blast out a quick world eater dreadnought that will be mounted in a dreadnought drop pod or a dreadclaw depending on what I’m feeling like. 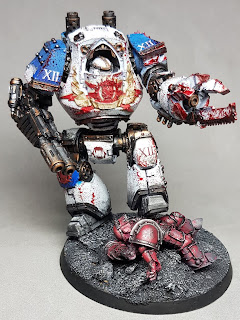 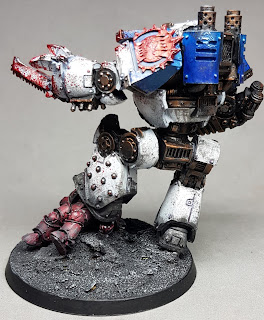 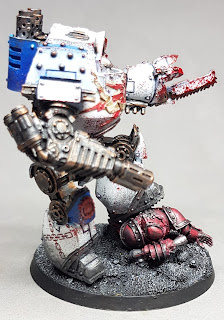 I followed the exact same process for the dreadnought that I did for the infantry as well as the other odds and sods that I did, I’ve very happy how it came out and the weathering suits this army really well, the dead dude I found in my bits box I think it’s from a primarch base so more than likely picked it from ebay when I was feeling experimental!

So, for the rest of the month it’s working on the natives for Blood and Plunder not quite hardcore as the start of the month however a unit once in a while should break up the other bits I’m painting,
Which will be the first unit for the armoured break though list in the form of three predators and whilst I’m going through them I’ll be working on a commission for Lee from the Bleeped up podcast and doing his nightlords so with a test model well under way all I need to do is research lighting and make sure it meets his expectations and bang out the rest!

Really I should finish off the two huge drop pods however I need to get the motivation to get the masking done as that the most time consuming part of airbrushing!

Doing both the hulls and the turrets took me an entire evening of faffing about and I needed to move quick on these as the tape lifts on the uneven surfaces if left too long. So I'll provide an update at the end of the month with the predator's.
Posted by Anton at 16:59 1 comment: