Addation to the household - The Covid Armies continue

Well once again the month goes on buy and before you realise its time for a monthly update!

An action packed month in the world of the Anton real life wise however lets focus on the plastic crack that we all love and cherish.

Way way way back when I started doing the traitor knight army for horus heresy I gave myself a personal pledge that I would only play with the knights once they were all painted.

I didn't think this would be an actual realistic goal as every gamer has never really "finshed" an army. However I thing this is a first certainly for me where I'm a mere two knights away to completing the list that I put togeather a while back.

I wasn't expecting to have three normal knights in the force only one, but as I got a good deal I figured why not!

All that is left to add to the above is Acheron and a Castigator and its done and dusted!

I've been told by a number of sources that this particular knight is a quite a pain in the arse and looking at the weapons its quite tasty so I'll look forward to fielding this lovely lot in 2022! 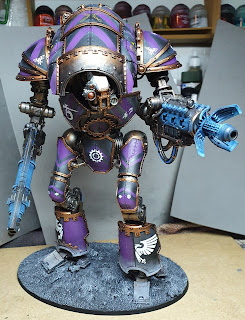 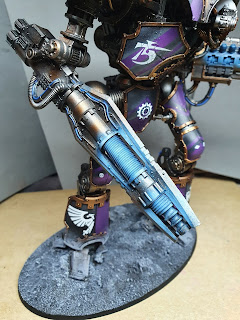 I decided to go gucci with the weapons and try a glow effect, which I'm quite happy with. 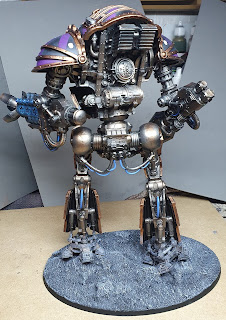 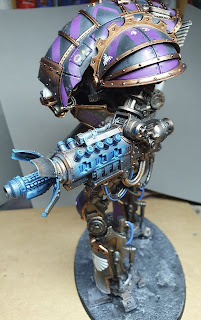 So whilst this was being painted which was a bloody slog to be honest as I've fired the 3D printer back up and been sorting out some commisson stuff for the same chap who asked for the Galactica earlier in the year.

After chit chatting with the chap I found out that he's not been having a particularly good time at the moment and as a big Star Trek fan I printed this out just need to clean it up and give it a blast of paint. 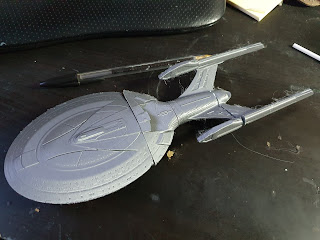 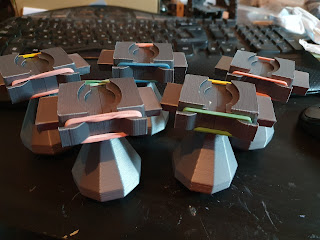 Just need to work out what 5 man unit to paint with them!

Mean while I managed to get a socially distanced game in of the new Warlord game Victory at Sea, now if you have been a gamer for a while this is the ruleset that Mongoose Publishing did for A Call to Arms for babylon 5 about 15ish years ago then converted that core system to WW2 naval warfare and its eventually been bought by Warlord and released with some tweeks by the orginal rules writer and models to go with it.

However this is not without the controversy of the ship models being on bases, which is like marmite you either love it or hate it. Now I'll fess up at first I turned my nose up at these and wasn't moist for it at all however after seeing them in the flesh at the Warlord shop I didn't think that they were too bad.

So with a game arranged with a very old short and grumpy bloke, I decided that fully painted was the way to go and with that in mind I hit youtube and found a really good fast and dirty way to paint these tiny little surface skimmers!
Paint all the Minis Fletcher Speed painting
Seriously check this guy out as I took this.... 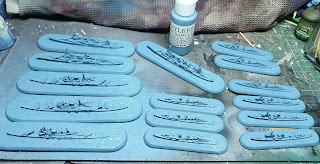 To this in about five and half hours... 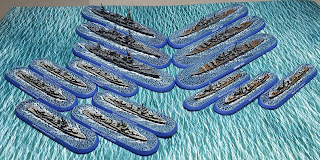 And a big chunk of that was waiting for washes and the airbrush colours to dry! 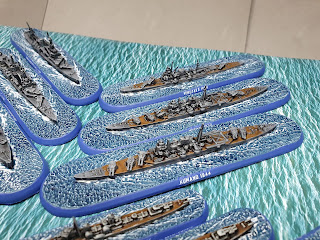 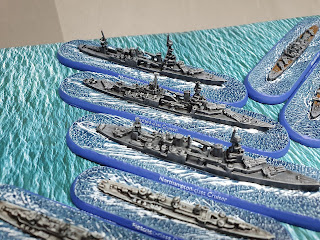 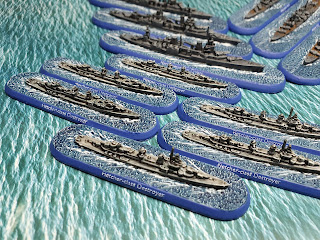 Over all I'm really happy with these as a tabletop quaility paint job and I feel anything more would just be wasted on a game that I'll play now and then.

Continuing with the Warlord stuff I got some paint on a few bits for my K-47 AI British army, so a couple of units, HQ element and an Observer to kickstart this into action.

Now the plan is to do a slow grow on this and I've already got another 2 units on the painting table. 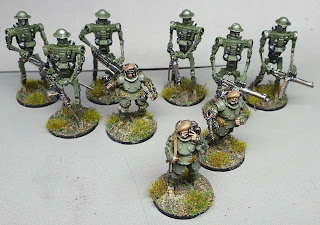 However as I live in hope that I'll be able to book a demo table as the Leicester Phat cats I've started working on some thing to face the machine gun toting robots.... 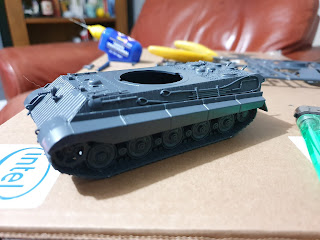 Finally I also decided to start on some of the starwars bits that I've had lying around for a while and nothing better than some good old waist high cover!

I tried something differant with these and got a makeup brush to use for the drybrushing and it worked a bloody treat!

so despite a month of low motivation its a healthy amount of stuff that I've knocked out.

Now with our glorious leader locking down for a month I'm sure more hobby will get done, assuming work doesn't go bonkers!

So stay safe and no licking people!