So it’s my turn to hijack the Anarchy of Anton....

On 21st May, Leicester Phat Katz Demo team marched to war again- or drove for 45 minutes up the M1, whichever sounds more dramatic to you. It was part two of our plans for global domination in the form of running demo games for Mantic this year. After great success on producing a table and two armies for Kings of War to take to Salute de big smoke it was now time for a chance to dip our toes into some Warpath.

Unlike the spec for KoW (a realistic limited budget for average Joe the wargamer), the Warpath table had to be BIG. Ronnie the supreme leader at Mantic- ‘all hail’, asked the demo team to produce a table that would be big, bold and more in your face than a bunch of Brokkers on a bar crawl (not his actual words). Made mainly out of the battlezones scenery the only limit would be the size of our cars, or in fact my little ford fiesta to start with. The hamsters that spend most of their time dormant in our skulls awake with a fevered energy, jumped onto their wheels and soon ideas were spewing out as we nipped back onto the motorway back to sunny Leicester.

With the ideas bouncing back and forth we soon decided on a desert city warzone with hopes that our dirty grubby mitts would get hold of the new industrial sprees to create a large refinery.

Rough sketch to plan the table. 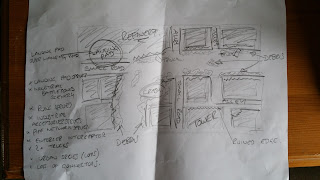 It was decided the table would be 6’x4’ which could split into three sections to make transport and storage easier.
The layout was then marked out, eagle eyed readers will notice a slightly evolved design. 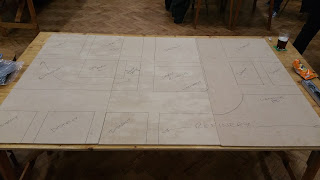 To add more detail to the board I wanted to include roads and pavements, the roads were simply 120 grit sandpaper glues on with pritstick. I then went on the hunt for some mdf laser cut pavements, after a chat with a few guys at the gaming club I found some by a cracking company called Warbases who can be found at war-bases.co.uk the folks there also produced the movement trays we used on at the open day. Once the pavements were in place 3mm mdf was used to create the bases for the buildings to stand on and that’s when the fun started..... 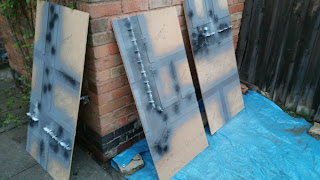 Using a rubble mix made by Tim (a recipe passed from father to son since the dawn of time)and a ton of bird sand the boards were based, when this was dry the whole board was sealed to help the paint adhere to the sandpaper- in theory anyway. The boards were primed, preshaded and then sprayed with Citadel Zandri Dust. The week before the open day all hands were called to add finishing touches to the board. 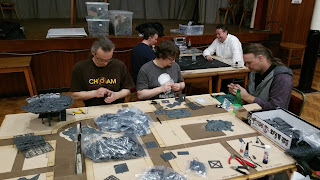 So here we are in all its glory, the demo games were frantic and constant throughout the day and the demo team had a blast. I’ll leave you with some pictures from the day and allow normal service to resume. 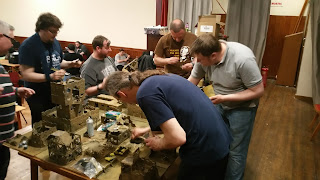 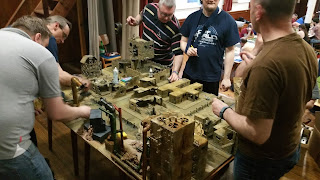 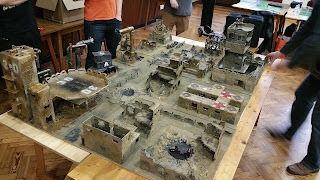 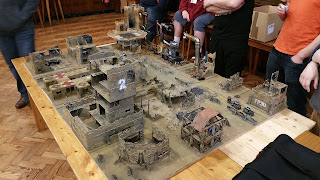 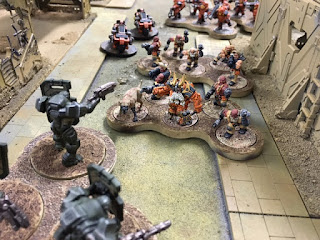 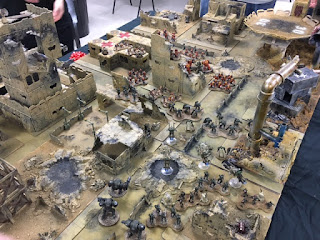 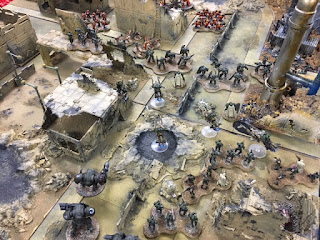 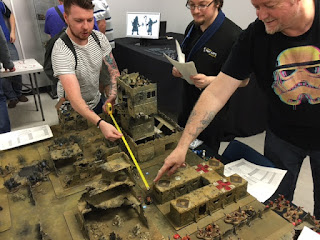 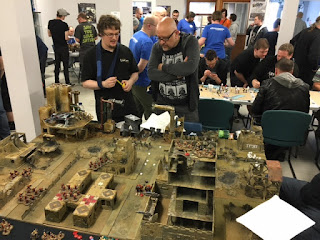 Nick (the other one!)

Ed's 30K hobby project is still steaming along and this is the overview of phase four.

So from the big man himself...

My Solar force is really coming together now, the overall design of the army is STUNNING! The way I'm building the force is to show the raw essence of a Pre Heresy Solar Auxilia Force.

I've been looking to building a more diverse force over phase 4 so I've added in a Triaros and Thallax. My intention is that the transport can be used by a variety of units in the future, and thinking past the goal of 2000pts the Thallax will provide a versatile unit that can adapt to different enemies as the next few pledge levels roll on. I've really enjoyed painting the Triaros but the Thallax have been quite fiddly and a little monotonous, which doesn't bode well for the other 29 that I've got to put together. I'm not sure what pledge level 5 holds as yet but I think my Magos may get a little more handy in order to deal with all those special characters that have started to appear.

I've been changing the army composition with each pledge. The joys of Shattered Legions, so much variety! I started as a very fast moving Scars/Thousand Sons force, which has slowly gone to a heavy weapons, slower force with the Scars removed for Iron Warriors. Thousand Sons will always be the core of the army so they get the lions share of the toys.

Next up? Finalising my pledge 5 list. It could probably contain anything at this point!

Building towards bring in a Praetor and Land Raider next pledge this pledge was used to add in some heavy infantry in the form of Cataphractii Terminators, the Sergeant using a Vigil Pattern Stormshield to (hopefully) weather the attacks in challenges before striking back with his Thunderhammer.

To add to my pledge 4 I have gone for a Dreadnought with a Legion drop pod to give me some heavy support to when the Dark Angels come crashing in from above. I am finding that the bigger points allows for more drop pods to come especially on that vital first turn. The future will look for some more drop pods and air support to deal with the heavy armour racing around.

My Alpha Legion are evolving with every pledge , I have painted up around 2300pts over the course of the events , due to the expense of the units I can only field half size units, however for this month I can bring two full size tactical squads and a full unit of dark furies, probably not a game winning army but it will be hard to kill them all.
My best performing unit so far has to be the Scorpious and it is always first thing I pick closely followed by a Mortis dreadnought with twin Kheres , it is going to be even more important now as flyers appear, it's sky fire ability will be priceless!

Phase 4 was easy for me as all I had to do was re-include some of the units I dropped in phase 3 to free up points to fit the Leviathan in. I have tried to create a force that embodies the "Flesh is weak" theme with many bionic upgrades on the vets and the inclusion of 3 walkers. The force is very durable but lacks punch at range so I plan to change that in phase 5.

My phase four consisted of the following..... 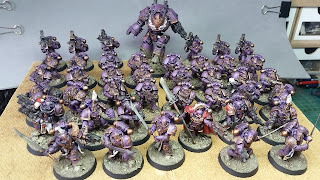 a lovely sea of purple ready to get the snot shot out of it!