Using RTV silicone and making your own molds,

Recently I've been going to a club over in Coalville ran by a chap called Andy, as he's a one man band and a great chap I decided to help him out with some scenery for the lads that play 40K over there.

So I ordered some jersey & K barriers so that I could recast them and provide some waist high scatter terrain.

So after sticking the bits to a piece of spare plasticard, 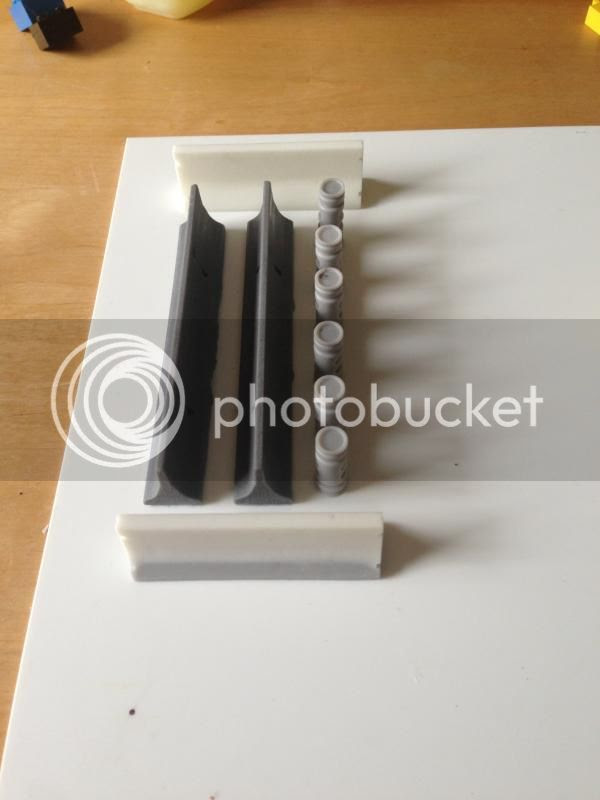 I built a lego wall around it and smeared Vaseline to seal the cracks, 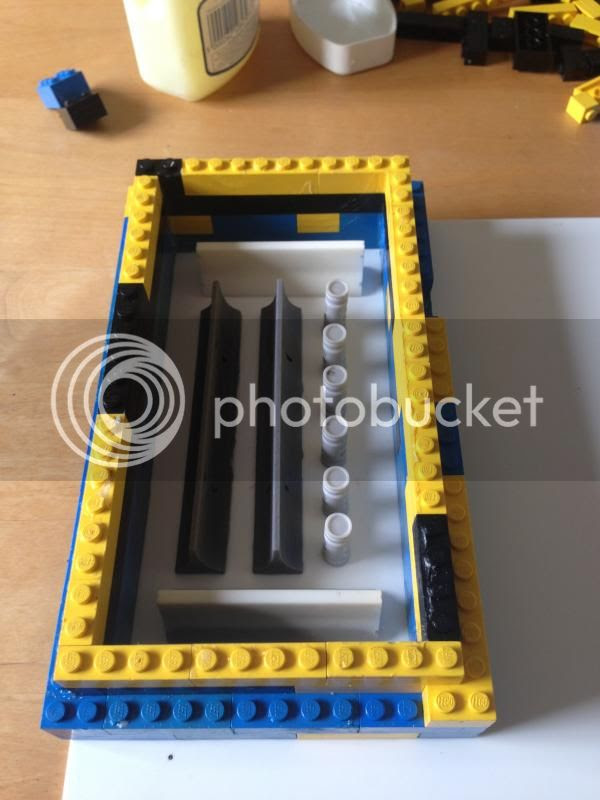 now normally you would work out the volume that you would need to mix but the place I got the RTV from didn't have that info on the technical sheets and didn't comeback to me via the email on there website, so I decided to simply "wing it" and give it a crack, One of the chaps that I play against on a regular basis suggested making a vacuum box to get rid of the air bubbles and all that jazz, but I'll look at that another time. 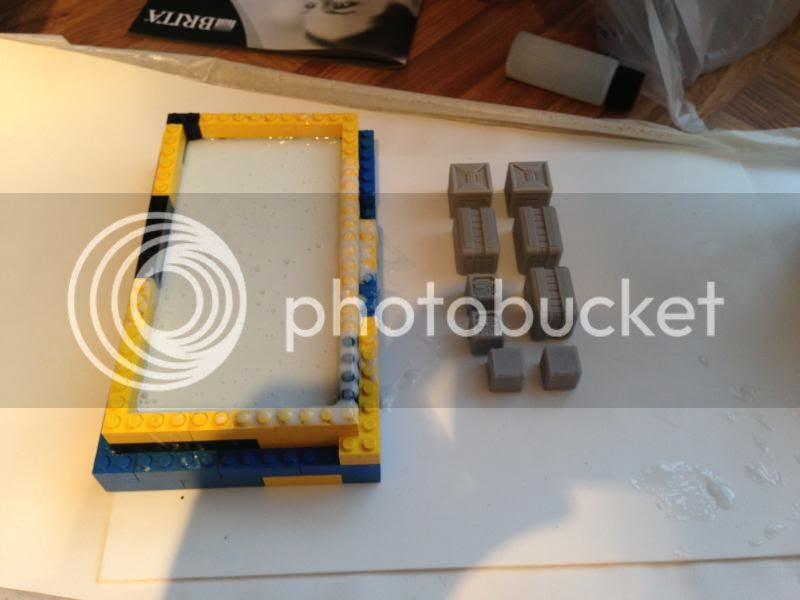 So after some guess work I used about 350g of mix and in a moment of madness managed to use all the catalyst! even though the ratio was 100:1.5 so I'm now on the hunt for more!

If I'd enough lego I could have done the crates as well but that can wait till another day, So popping the mold was quite tricky as I didn't want to rip it but after some work it came off, 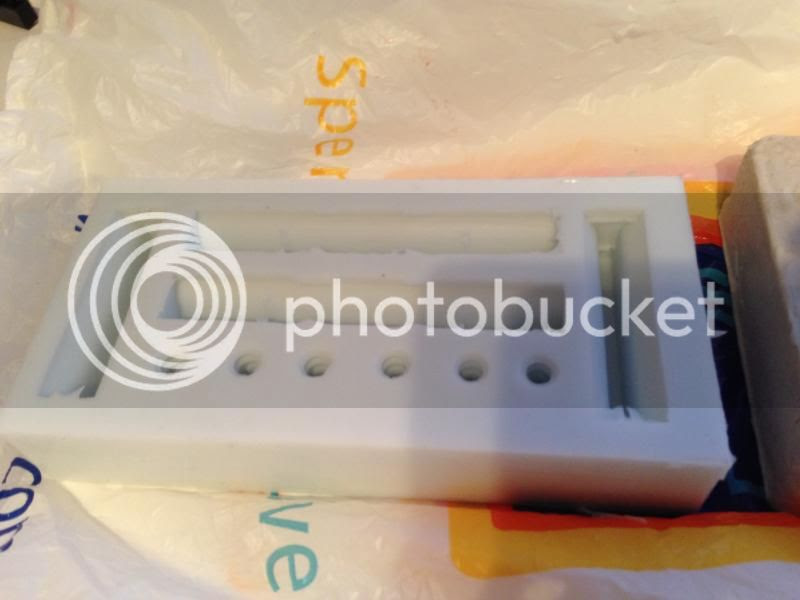 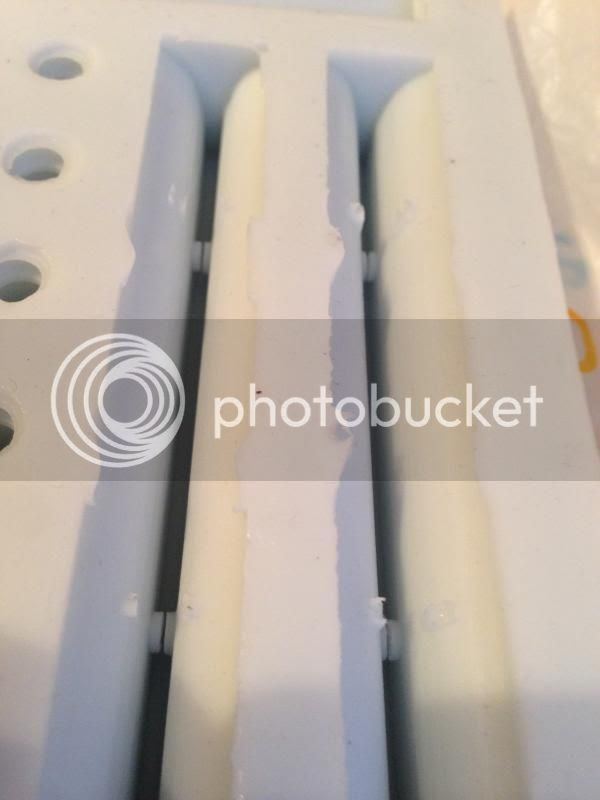 So I poured the first cast and waited a good 90 minutes before popping the bits as the energy barrels would take a while to set, as as usual mixed too much plaster so I had a spare mold and one of Isla's sand molds to hand! 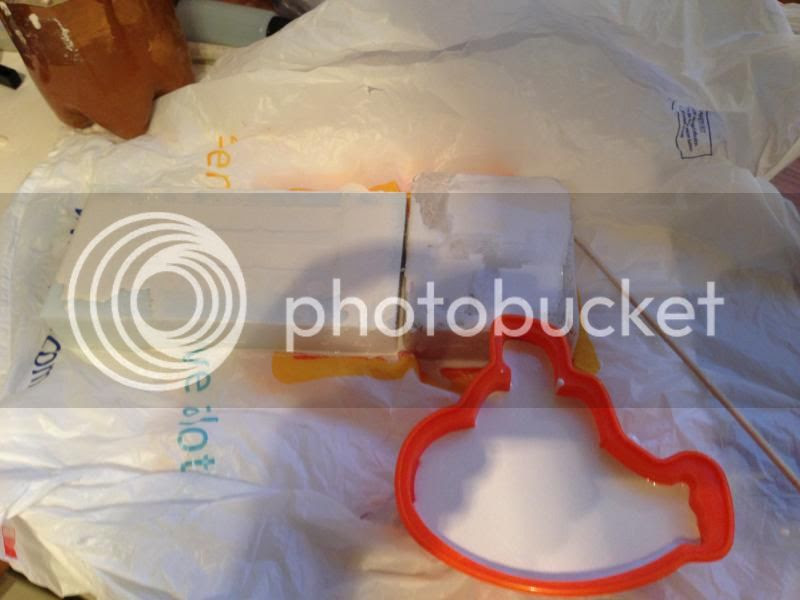 So the first casting compared to the originals, overall I'm very happy with these and a nice quick paint job and it'll provide some simple scenery, 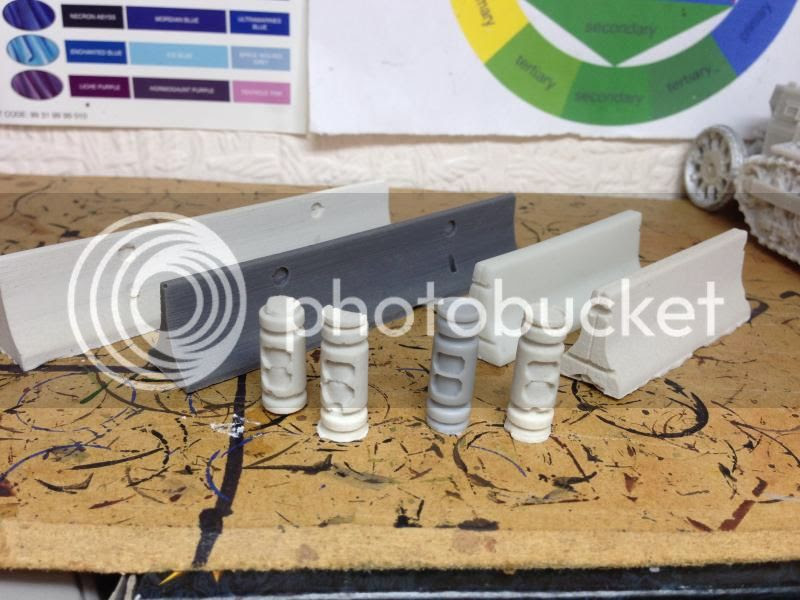 One thing that I wasn't happy with was the energy barrels and with a little playing about I did this, 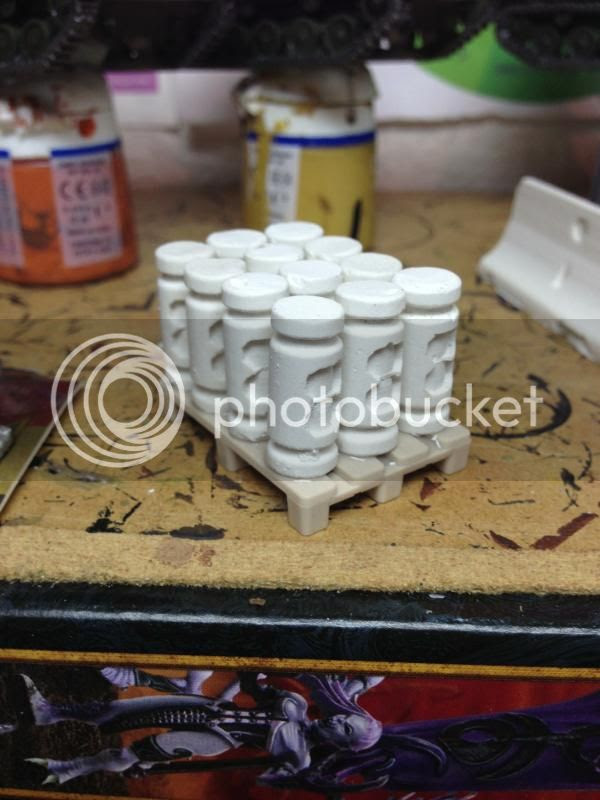 So I'll paint them yellow and I'll get a nice looking scream supply dump and post up some pic's.

So I wandered over to the Mantic open day on Sat with Coops and decided to give the dreadball tourney a crack,

I rolled with the Orc's and with the tourney pack that I downloaded from the Mantic website spent my 30mc on a extra guard, extra coaching dice and 2 skill up grades, However thanks to Coops eagle eye on the form on the day it stated 20mc! so the skills went.

I wasn't overly fussed about the last minute change but personally it was a school boy error with the people running the torney as in the amended pack you could buy coaches and the like!

The four games I had were all really good and only got frustrated in one of them due to the fact that the chap I was playing against was fouling all over the place and doing some very dodgy underhand tricks with using the ball as a weapon!

I found a snap of the first game with Coops becoming famous, as well as my forearm!

As I was  in the tourney for most of the day I managed to get zero pictures! So the scores on the doors!

Game 1 - Judwan, got rolled 7-0 but later on speaking to Rich discovered that our game lasted the longest and had him worried the most!

Game 2 - Forgefathers won 2-0, real tight game and ran out of time but that didn't bother me as the chap was a nice guy and we spent most of the game chatting and the like!

Game 3 - Forgefathers draw 0-0, the one that did my head in! couldn't roll for toffee and with most of my team in the injury bin I'm surprised that I managed to do as well as I did!

Game 4 - Judwan against Coops! lost 3-0? spent most of the game battering his players and basically beating the be-jesus outta his chaps!

I've no idea where I placed as we didn't get any printouts etc, but the standings will be put up on the mantic blog.

In between games and at lunch I had a wander around and had a look at warpath 2.0 which looks quite nice and a lot more rounded compared to the 1st version, with the deadzone kickstarter going though the roof I tried to have a look at that but the table was always rammed with people so didn't bother in the end but looked at the greens and so on and they look ace, so looking forward to seeing the kickstarter complete and getting my funky toys! 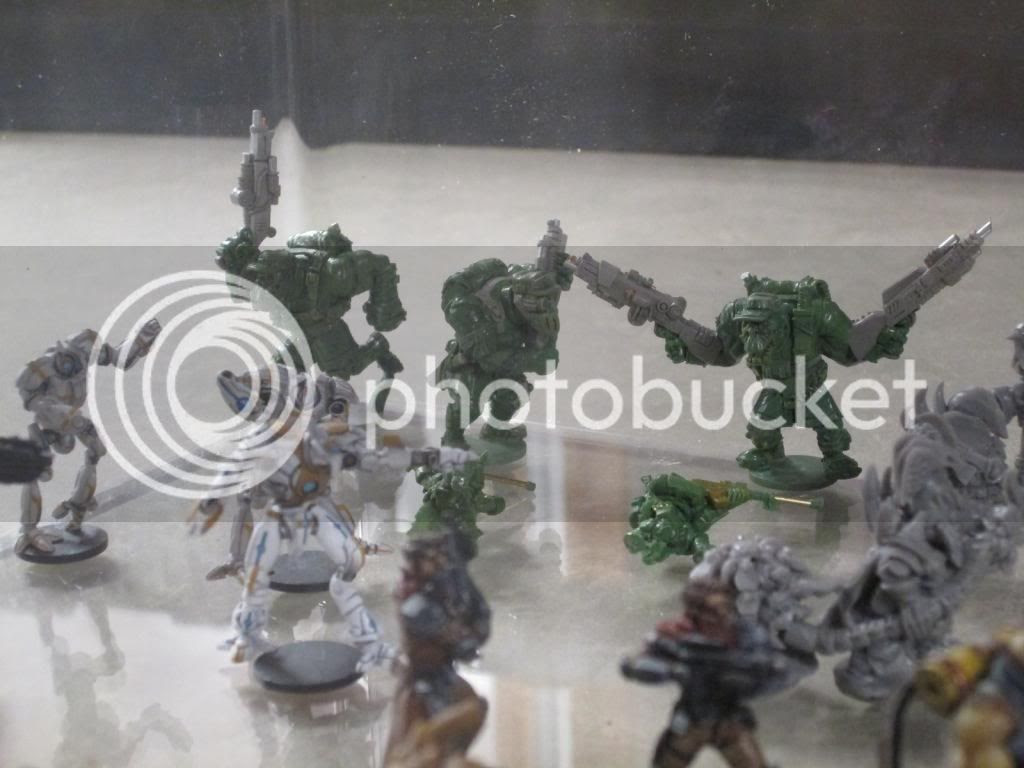 The strange thing about the Mantic open day was the venue, a disused medical centre with no heating, partial power and the rooms that were used small and difficult to get around with the average gamer being "large"

If I'd not been in the tourney and paid a fiver to walk though the door I'd be miffed personally but strangely enough not seen any feedback on the mantic forums with regards to the venue? so I'm going to pop an email over to Ronnie and the crew with some constructive feedback rather than posting on the forum and becoming a flame/troll setup.

So now I've got my season 2 dreadball stuff I've plenty to crack on with and adding the SU-76's that I picked up at salute that I'd like to get done for Expo at the end of the month I suppose I should stay away from XCOM enemy unknown (2012 version) and do some painting! 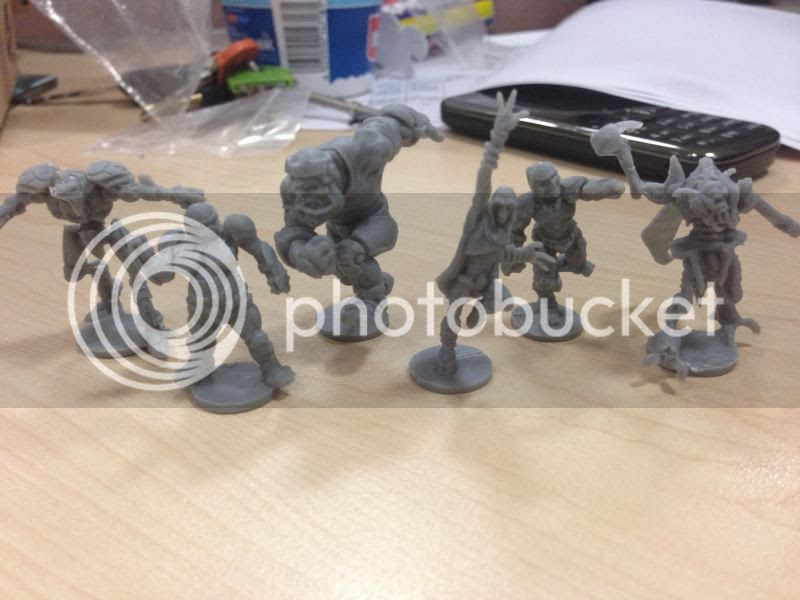 The Z'zor team that's missing a player so will arrive in season 3. 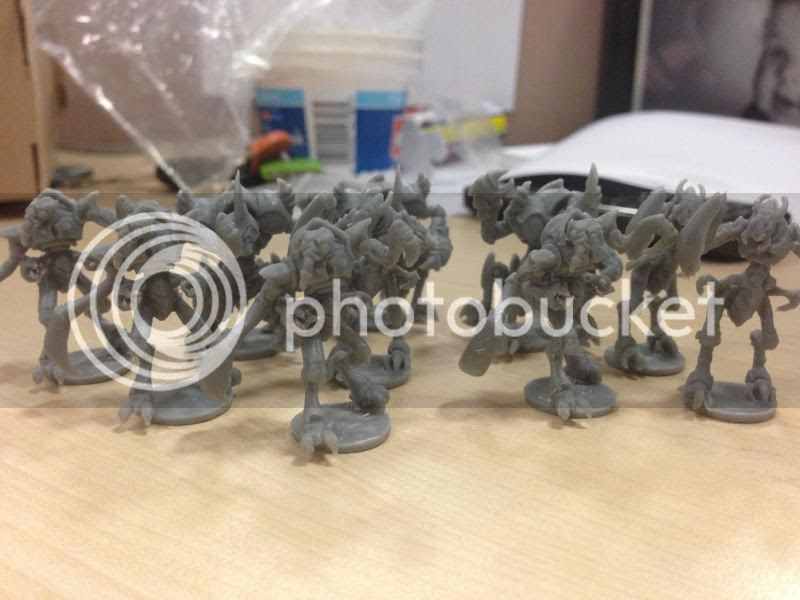 The robots, yes I could go all fancy and paint them white, but I that's not gonna happen! 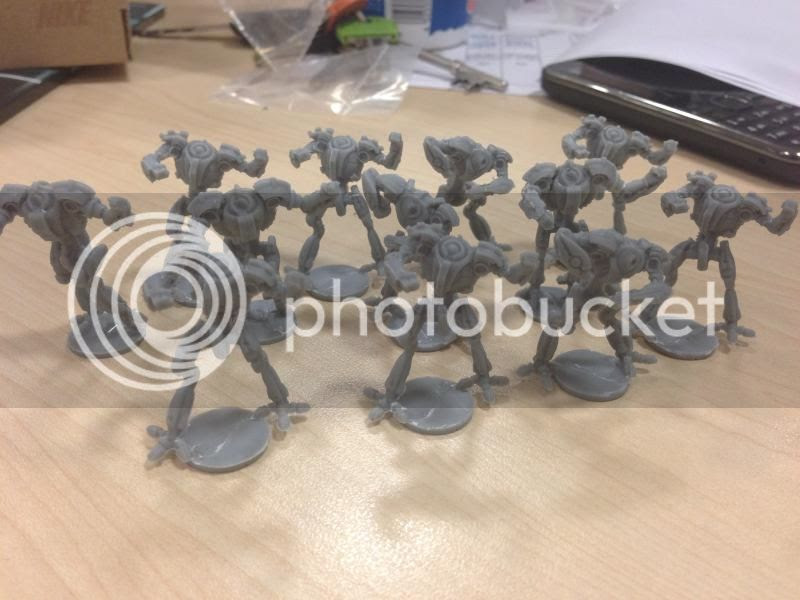 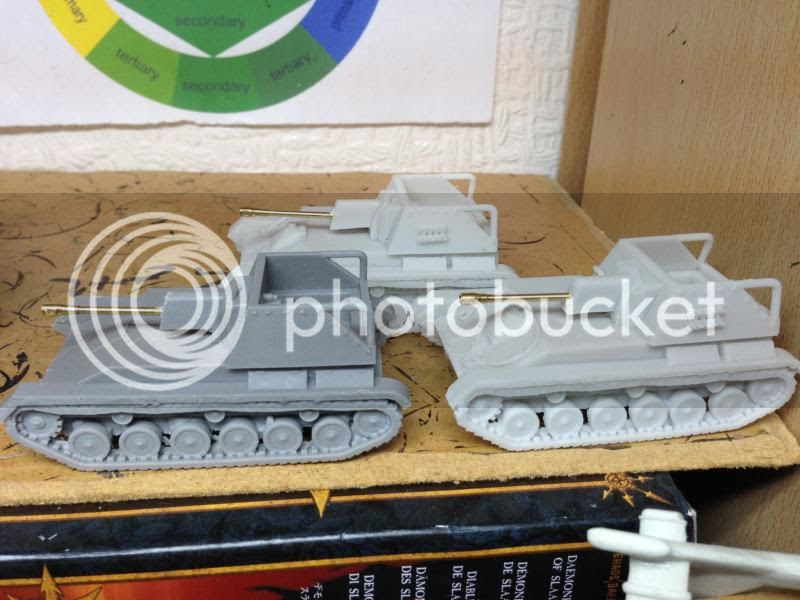 I've also got some crew for these bad boys as well,Finally because I don't play enough systems and have enough unpainted models some prussian HMG's for D-legions. 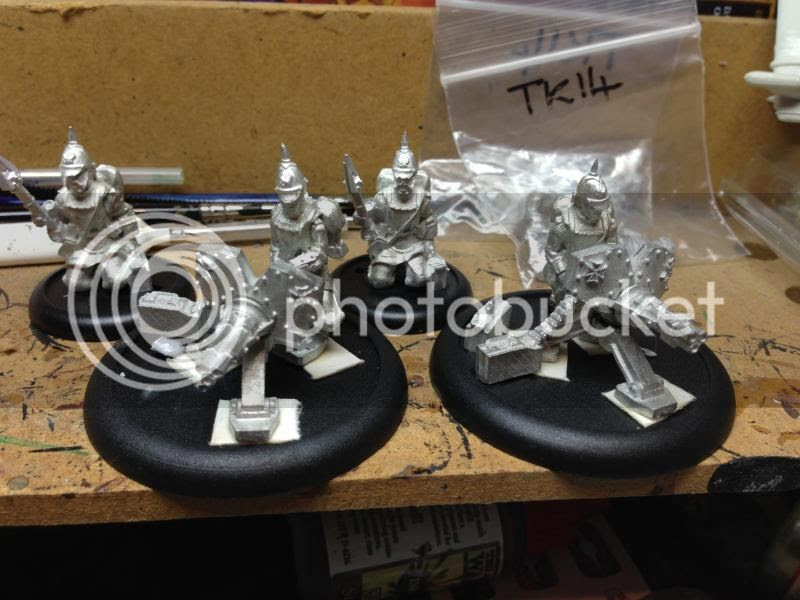 So without further ado I'm off to crack on with some painting!
Posted by Anton at 21:57 No comments: