Time for something different - AoS Sylvaneth!

No doubt for those people who know me you'll be asking yourself.. Yep that's right I'm gonna give AoS a crack with the Sylvaneth, now the reason why I've been turned to the "square" side is that when I'm painting at night I'll listen to various youtube channels and one of those channels is the Andy & Rem Show where between them they waffle on about AoS and over the last 18 months I've found the constant releases as well as some of the model kits to start catching my eye.

The ones that I've had my eye on for a while are the "wood elves" but was never fussed about the tree hugging hippy elves I always preferred to dryads and the like and after spotting some of the newer kits I decided to take the plunge and picked up the 50 quid start collecting box set as it seemed a good starting point,

So in the traditional Anton fashion I've splashed some paint on these killer twigs. 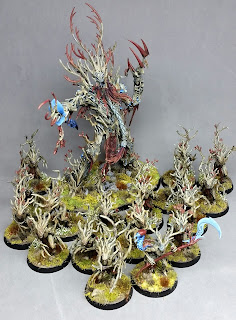 Close up of the branchwraith and the dryad unit leader 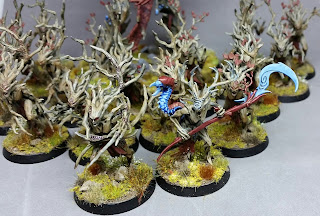 Rank and file for the slaughter 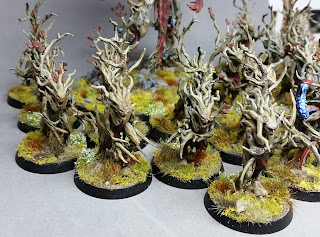 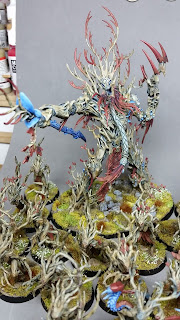 painting wise these were a doddle to paint and to back up that bold statement here's the way that I did them...

To start of with I sprayed them with halfords grey matt primer,

I dry brushed the model with a light grey to start of with and then gave it a liberal wash of athonian camoshade. 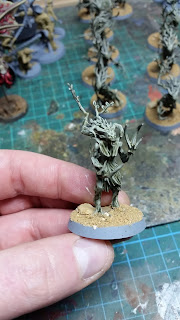 after letting this dry I got some English uniform and randomly put it in various places on the model for a non uniform look. One that was done I picked out other random parts with khaki but with a really light drybrush so that it wasn't too much. 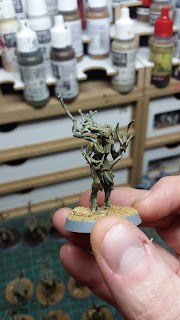 I then got flat earth and picked out the loin cloth leafy thing and the individual leaves on the rest of the model. I gave this further highlight with some flat red mixed in.

For the eyes and the patterns I used a purple ink straight from the pot and that was it really. Nice and simple. 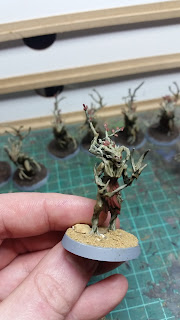 For the big guy I did exactly the same just more of it! and for the blue staff I kept it grey then used a pastel blue for the detail and then hit it with a blue glaze, I also repeated the same on some other areas of the model and to break up the "flesh" bits I used the blue glaze in the recesses to add another level of colour for the ohh factor. 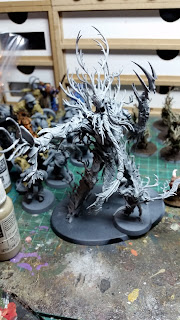 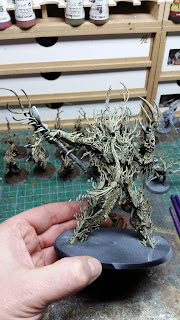 Over all I'm really happy how these have come out, and I'll pick up some other bits and bobs as time goes on. how much I actually get will depend on how many games I will play!
Posted by Anton at 11:24