The pledge and monthly round up,

I thought the other day that I hadn't updated the blog for a while and it turns out its been a whole month!

Now I've not been working on some super secret project for anyone I've been busy distracted with so many different things hence the lack up update.

Well after the hardcore weekend of the expo I decided to have a chill and do random stuff that I've had kicking around.

So I've been working on the Kings of War, Kingdom of Men arab themed army and I've been focusing more on the units that I can get ready for Septembers Torney over at Loughbrough Dice devils, 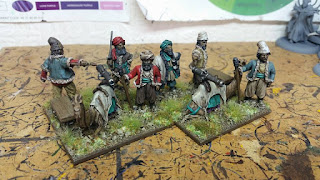 So I managed to get my Camel Cannons sorted out, I spotted these on a kickstarter and these would fit into my army perfectly, you can find them here... http://westfaliaminiatures.com/

These were really fun to paint and were a nice change compared to painting infantry, talking of which I've finished a unit of 20 rifle/musket armed guys, Nice and easy and another unit to add to the list. 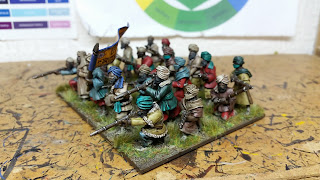 I decided that it was time to have some fun and sort out the heavy cav, 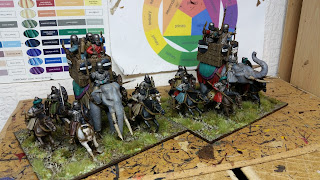 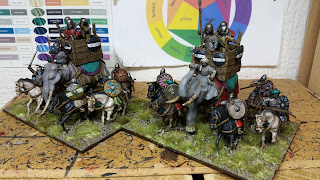 The elephants I picked up from http://www.aventineminiatures.co.uk and the horsemen are from gripping beast http://www.grippingbeast.co.uk

I initially thought the units would be quite daunting as I've never painted an elephant and with the big areas of skin I wasn't sure how to tackle them. In the usual Anton manner I simply dived in and went for it once and these are now sitting on the shelf waiting to be used!

So next for the KOM army is 2 units of cav using the gripping beast light arab cav guys, once they are done then it'll be either a unit of pikemen 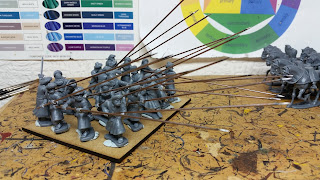 these are converted from plastic arab warriors with 10cm lances, a bit of jiggery pokery with the wrists and a quick pin vice and 20 guys later these are good to go, just need a bit of green stuff for gap filling.

The other unit that I'm working towards is a couple of units of scout cav, however I'm planning on doing these with a difference and mounting kneeling arab type bowmen on flying carpets, The onl;y thing that I need to suss out is how to print out the carpet at the correct size, something that I'll faff around with later on.

So what else have I been upto?

Well I've been gaming loads and one game that I've been introduced to is Lion Rampart, only managed the one game so far so once I get a few more games under my belt I'll do a first look, 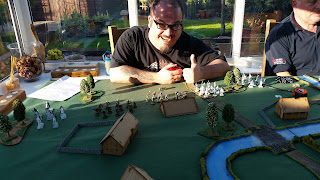 Kris was feeling quite confident at the start of the game, the quickly went down hill when my force decided to turn up!

Due to that one game I'm now a huge pile of Koreans to paint up! 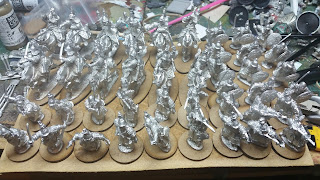 I managed to pick up a copy of the new Terminator game, Once I've sussed it out I'll post my thoughts on this one,


I wandered over to Titan games at Litchfield and ran a big game of warzone, a right mix of players some who were involved in the expo torney, the black widow and icarus came out to play and they were brilliant. Great venue and great guys over there, go check them out. 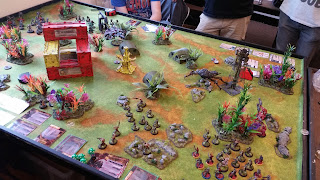 Over at the club we played a massive game of starwars armada and got out arses handed to us by the imperials, so next time I'll have to make sure I actually read some of the upgrade cards! 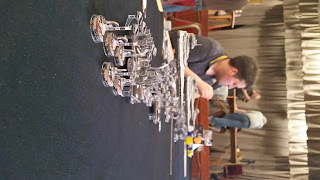 Then the blast from the past is a Mordhiem campaign that I've got in the works, as a warm up game I ran a 9 player game earlier in the week and it went down a storm, I'm currently working on a lizardman warband so that should be popping up fairly soon once they are painted and I'll post up updates as the campaign develops 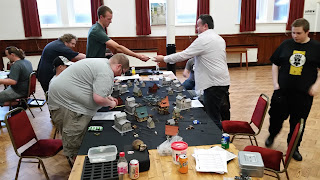 All the usual suspects!

So a few days ago these pics were plastered all over the net, 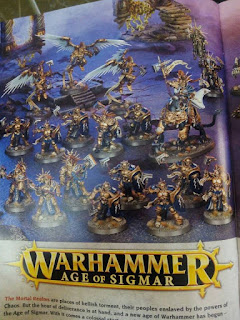 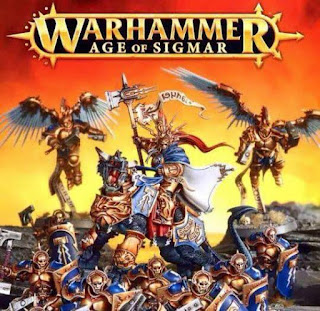 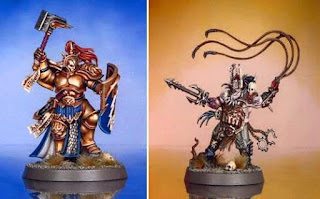 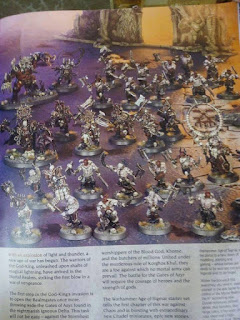 Normally I'm not bothered by GW releases as I've not played 40K for a while however necromunda and with the mordhiem being played at the Phat Cats the new age of sigmar has got me pondering I'm not in the screw you GW camp and I wasn't a huge fan of fantasy battle due to various reasons, however the models look ok the humans look a bit "space marine" for me personally but I'm more interested in how the system plays. So this is something that I'll be keeping an eye on as people do unboxing and walk through games.

So onto the pledge..

its not been a particularly good month due to the amount of KOM stuff that I've bought, I was tempted to blast though a few units and see if I could break even for the month but I simply decided to have a bit of a chill month and refresh the mind and actually need to focus on a couple of projects as since the AVP board I've been bouncing all over the place painting wise,

So projects/wishlist wise this is the current list I'm working towards for the second half of the year..

Now I knew that me and the Norse God like Lee were going to be busy.... But I wasn't expecting the amount of traffic on the AVP board as we got, For what ever reason the trade hall doors opened at 09:30 when we all thought it was 10:00 so caught us off guard and we were still setting up the models as people were queueing to get there AVP kickstarter copies.

No surprise they were all gone by about 09:36! which lead to a fair few sad faces throughout the weekend when I got asked if there were any copies left.

Pretty much it was non-stop on the Saturday, Myself and Lee had a quick bez around for about 45 mins, and on the Sunday it was not quite as busy but still steady with regards to running demo's. 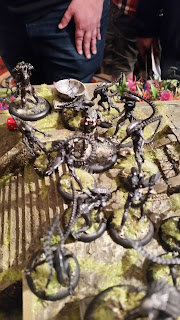 Everyone who played the game over the weekend walked away with a smile on there face regardless of who won, and loads of positive feedback on the table and models. Huge thanks to everyone who played and kept us going with the laughter and Hollywood moments that we made up on the spot! 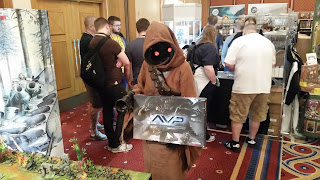 I did manage to sneak away and go check out all the bits that I was looking for, due to the super market sweep style shopping dash I managed to grab bugger all pictures.

One game that I wanted to see was Route 666, and I headed to the pool where we normally do the games with the Phat Cats and found Mark demoing his ass off to the masses! 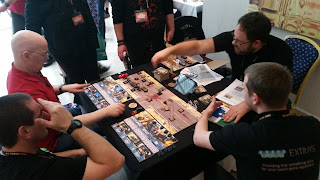 The over sized components were a bloody good idea, and the system looks fairly simple, 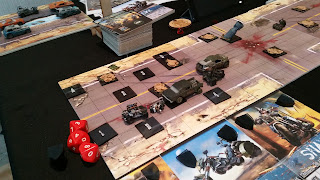 The models look really nice and the bikers are cracking. 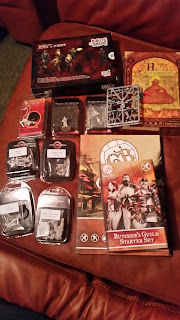 I picked up a fair chunk this time, shows that more wargaming type companies are showing up, In the haul was...

Guildball starter deal, Butchers team, already the frothing has started within the local area...
Some more Microcosm stuff and I had a great chat with Andy and can't wait to take it down the club
Terminator resin models
The Hen commandments from Terrorbull games, this was a kickstarter pick up and looking forward to this.
And the guys from east street games gave me a bullet and brains starter set to pass over to Dan at the club, I've a quick look and the rules are really quick and should be a good laugh!

So onto the "Pledge"

So another successful month, and I'm surprised that I've not had a negative month so far certainly Salute normally gives the pledge a kicking, I've still got Derby though and that's looking like I could be going as a punter so another road trip for me & Isla!

With the Survivor series yea I'm still in the running and enjoying the progress that all the other guys from the Scars are making, Slight change to the rules so that the pledge for the month has to be a legal unit in the chosen system which makes sense.

So now that I've a few months to chill before the next show, I'm going to focus on sorting out the kings of war Arab army for the Loughborough Dice devils Torney is September, I've been chipping away at this since the beginning of the year and now its time to step up the production and start bringing the cool looking units to the table!