Now and then I'll have a mooch at the terrain pics on the beasts of war website and came across this sexy little number....

such a simple thing, but so well done, so one quick PM to the creator and I get his blog link back, and I've stumbled across a gold mine!!

Its a German site but Lenny is kind enough to put English onto the site for the un-educated, loads of tips and tricks and the cracked earth tutorial is spot on! 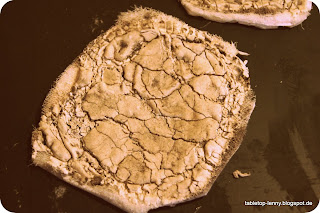 if your like me and terrain floats your boat go check it out, you won't be disappointed!


I've been going to a local once a month club over in Coalville ran by a chap called Andy,  Nice chap, rubbish at gaming ;)

Between myself and Kris we've been like a whirlwind of destruction within the club talking about various systems and tempting Andy & James down the dark paths that we tread...

As always four old farts chatting about models and various other politically incorrect subjects ended up going down the path of a once a fortnight club based over in Coalville as it doesn't have a gaming club? So me being me I've volunteered my services and been given the task of sorting out a 4x4 generic 28mm board.

I've had the ruined hamlets kicking about for a while so decided to break open a box and have a play about with them,

The actual bits you get in the box are quite chunky so will stand upto some heavy handed gamers, the thing I couldn't get my head around is that there is no "instructions" you can either copy whats on the box or wing it! I did one building like the box then the creative juices started flowing and I had a play about,

for the actual painting I kept reminding myself that this was for a gaming table so no need to go micro detail with the terrain after all I carn't have the buildings looking better than Kris' Brits!

so with the trusty fine detail brush and budget paints from the Range I dry brushed my way through the lot!

after I'd done the basic grey I got some brown and sponged the walls to give it a used feel and then some black for the damage done by the fire that would have collapsed the buildings, I avoided loads of rubble as I wanted models to be placed within the foot print no problem and to give it the been run down for a long time look.

Once I'd done the basic drybrushing on the bases I grabbed some poison ivy from army painter and had a play about with it, as ivy it looks spot on and gives the terrain a nice touch, some bog standard static grass and lichen bushes later and its all good! The PVA was still wet in the pics...

Over all a cracking bit of kit, now what to do with this....

I'm thinking something along the lines of.. So I posted up the big game that we ran at the Expo show a couple of weeks ago but hadn't posted up the actual tanks that I painted for the game,

It started off with a mere three SU-76's

The models I picked up at salute from blitreq miniatures the barrels from ebay and the crew from grubby miniatures, these are for the pledge on the guild forum to keep the motivation of painting an army up to speed. After I did the SU-76's I then decided to continue the "mojo" and did 3 T-34's

So I turned the hero's of the motherland from this...

with a single coat, the paint goes on really well and the shade of green is spot on for the Russian green that I use (VAL 70.894 Cam olive green)

so after some hardcore painting I managed to get this lot done for the demo game,

overall I'm very happy with these, and just need to finish off the other 10 T-34's that are on my painting table at the moment, then it'll be getting ready for task 3 of the guild pledge.
Posted by Anton at 20:00 2 comments:

Hobby spiralling out of control?

My name is Ant and I'm a Gaming Addict!

I was chatting with some of the guys that I know about gaming in general as you do, and we was winding up one of the guys with starting warmachine, Then this got me pondering about the amount of systems that I have but don't actually have a chance to play due to lack of time.

The list of systems I have models and rules for is...

Quite a list! and with some of those systems I've multiple armies.

So I'm gonna put my balls on the wall for this one and not pick up any new systems for the remainder of the year, and I'm going even further and not going to get any new armies for existing systems (the only exception is bolt action where I'm looking at the Russians, Japanese or USA but only the one!)

If I'm gonna buy stuff then it will to expand existing armies that I've already got, its gonna be a tough one as I'm terrible for SMS (Shiny model syndrome) and the internet is doing a great job of promoting new stuff all the time!

Well not quite, but not far off!

I managed to get the Phat Cats Battlegroup demo team into the Wargames expo over at Birmingham last month, I've been to a few of these shows in the past as both a punter and a torney player but this was the first time that I went as "demo guy"

The venue had changed from the previous place and was in a hotel near the NEC which I though was quite nice actually, food and refreshments were crazy priced but you can't win them all!

Compared to the previous years that I'd been the show was massive, and plenty of things to do and look at, this is just one of the trade halls/family games bit that I managed to capture on the Sunday near the end.

One of the demo boards that really impressed me and & Nick was the X-wing board and the way that it was made was very simple but looked lovely!

After running the Kursk game at hammerhead earlier in the year we decided to make a few changes to the forces and I was given the task of writing the German army list, and much to Phil's horror didn't include a tiger only one panther, As Coops got quite frothy on the Saturday and the points cost crept up I threw in the tiger and another panther for the "fun" factor!

Over the course of the weekend the table did get quite alot of attention from passers (including some cosplay ladies, which went down quite well with the 30 something virgins who still live with their parents!) by as not everyone was a wargamer so the feedback and overall comments that we got was really nice, also the amount of people that we managed to actually play was really good and on the Sunday 3 chaps from Somerset played the game for about 3 hours!

I was chatting to a chap on the Sunday who turned out to be one of the main organisers of the show, and was well impressed with the terrain and the models, Tony was quite determined to get tabletop gamers & traders back to expo and depending how this year goes workwise and well as GC Gaming wise I'm thinking of going with a small trade stand and selling the battlegroup series as well as some PSC models as no one had any WW2 stuff there, however there is quite a few "if's" in there so only time will tell!

During the course of the weekend it became quite apparent that T-34's are cannon fodder even to the panzer IV's and stugs, so when it comes to my own Russian force I'm gonna have to get some big guns out in the form of SU-152, and off table requests,

Some pretty pics of the table in "show" mode

and finally Adam getting his ass whupped by Rob at Dysoptian wars ;)

So thoughts are already turning towards next years themed table, Normandy is the most obvious choice however I'm thinking more sunny climates..