Only after looking at the feet that I'd done then did I think about some kind of base, two reasons behind this really...


So I wandered down to Gifts for Geeks and have a chit chat with Jack & Ross and see what ideas I could get from those pair, after a lot of discussion I decided to pick up the new GW battle scape, I was unsure if it would be stable enough to hold the weight of the titan, but no guts and all that!

So after I got it home had a play about with it and yes it would work, as the feet were already done I needed to have a play about to get them to fit onto the base without too much faffing about.

The only thing I needed to do was semi fill in one of the craters so that the flat foot could sit nicely and not look crap basicly. 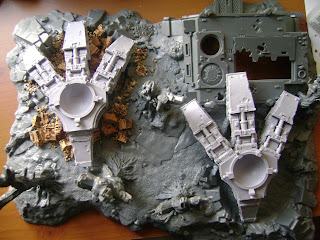 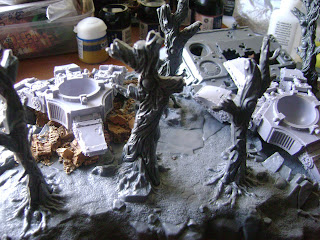 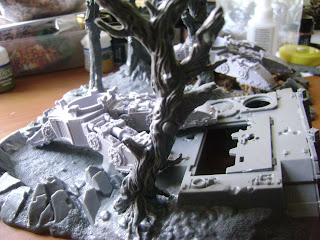 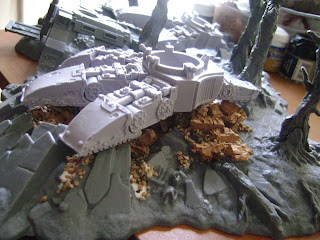 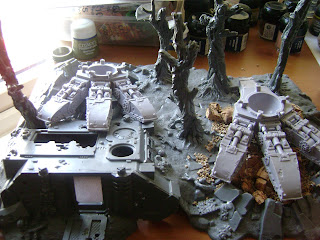 So the feet were sorted but not glued down I held them in place with blu-tac so on with the legs, now forget what I said about the the feet they were a doddle compared to the legs, with each one coming in four seperate sections they fitted togeather no problems the angles of the joints was the bigger issue so after about an hour of scratching my chin and playing about I figured I'd better get on with it!

But how to know where to move the angles too? well the good old pencil came to my rescue! I marked the bits I needed to mark and so that sorted out I went to work, banging both the legs togeather and connecting the legs to the hip,

So I sat back feeling quite smug with myself only to have the thought of "wonder what angle I should have the body at"
I looked at the hips looked at the hull and then good old Anton's Profanisaurus came to light it was too late to try and break the seal of the glue and I'm not going to risk breaking what I'd spent a few hours trying to achive!

I've decided to worry about that when I've put the hull togeather and then I'll have a play about, So this was the state of play by the end of last night... 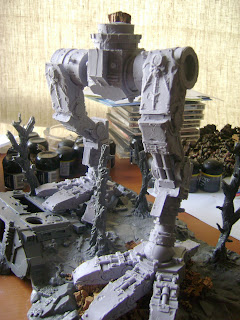 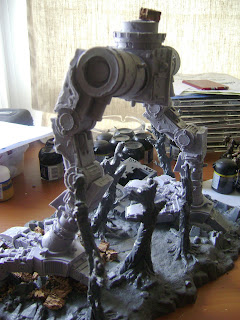 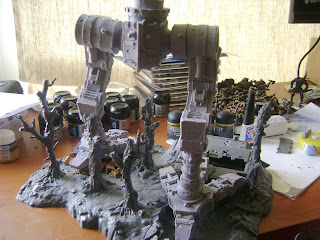 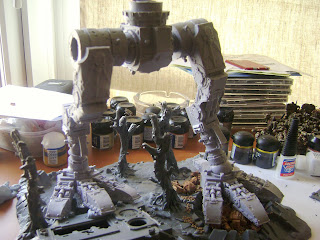 Its was a relaxing thursday, I was listening to a bit of Drum & Bass via Radio one's iplayer and one gets a knock at the door, For the Chaos warhound has arrived! Grining from ear to ear I opened the box to find this lot! 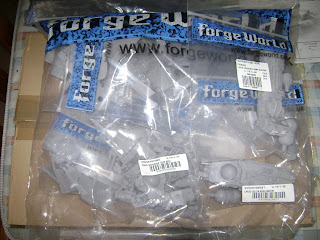 First thoughts were, fook me thats a lot of bits! and the doubt started to creep in, have I bitten off more than I can chew? but then with the "Ross" attitude I decided to man it up and go for it!


So this is the offical start of Anton's Warhound Project!
I washed all the parts for the warhound and at the same time checked that it was all there I'm only missing the thigh pistons but I'll ring forgeworld and get that sorted no problem, I then layed out the whole model, the model is bagged into scetions so I kept this in mind when laying all the bit out.. 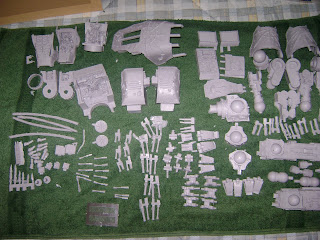 Only after laying it all out was my reaction.... 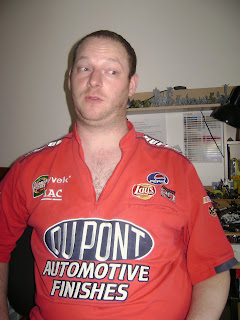 Ok so I decided to whip out the extensive and detailed instruction sheet for a model that costs nearly £300 the complete 3 A4 sheets double printed mind you... The bit that makes me laugh the most.... "The Chaos Warhound Titan is a complicated model kit" well no shit sherlock!

So I decided to crack on with the kit and the feet, I remember someone telling me that some bits of the warhound where a bugger to put togeather, well the feet are one of those bits! Why you might ask? well there is 24 parts to each foot! and as you can pose your model how ever you want there is a lot of scope for those much talented than me!

I did the first foot with it being completely flat on the floor so I could get a feel for the kit and to keep it simple really, I let it dry whilst I was out down the Gaming club (whupping Lee at warmachine I might add, but this is a very rare occasion!) and did the rest of the pistons this morning and made a start of the other foot, I wanted this to be a bit more dymaic so after a bit of thinking of how I was going to be able to do this the magic of Blu-Tac came about I put that under the main part of the foot and old cd and voila sorted! 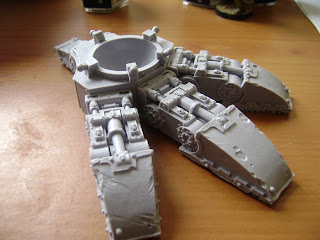 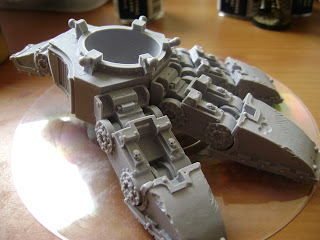 
On a bit of a side note here are the pictures of the cracking death guard I mentioned the other day so I'll be painting these as a break from the warhound.... 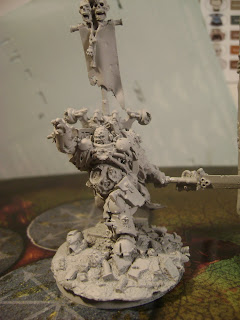 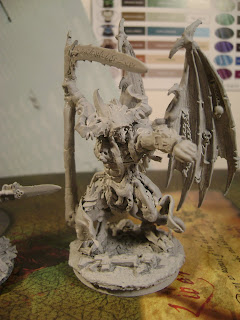 Converted Deamon Prince, but only after reading the rules for deamon princes I discovered they carn't have deamon weapons? how pants is that! 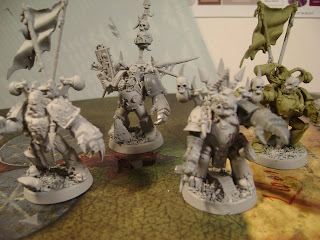 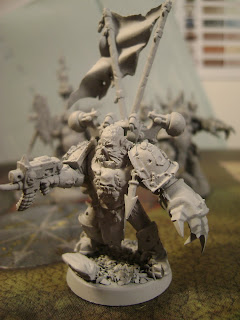 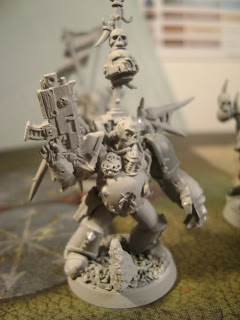 The Champions of the squads 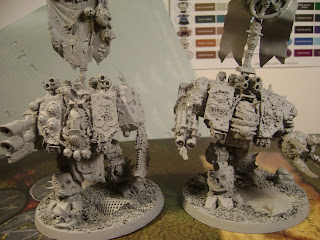 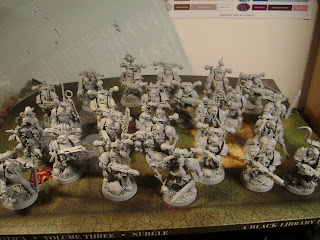 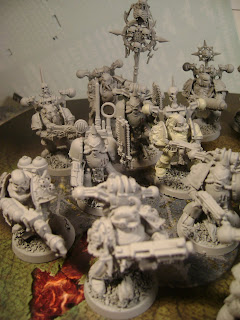 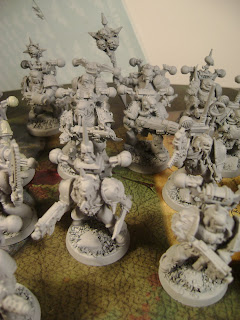 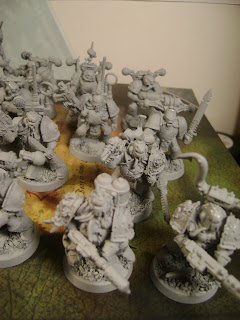 close ups of the rank and file 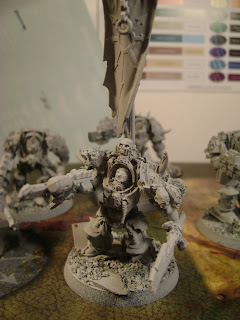 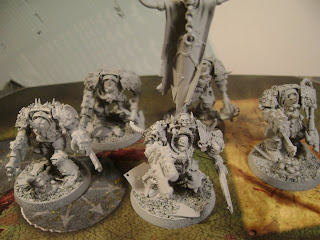 Like most people within the hobby that I do, I keep a lazy eye on ebay just in case you see something that would be a great addition to your army,

how ever sometimes you come across a real gem! I found a 1500 point death guard army, as my first thought was "I could finish the boys off in one fell swoop"

So the usual game of waiting and watching, the actual price of the auction was about the same price of the models quite a bit of forgeworld was in there, but with the army being built & primed that out weighed the con's.

So the models turned up this morning and in the words of brucie didn't he do well! I'll post some pics up soon aka when the camera batts are charged ;) but this is a list of what I got,

4 death guard sqds 7 men in each sqd, each lead by a champion with a power fist, and 2 special weapons in each one, Now the the bonus about the troops is that there is not a "standard" marine in there! simple but cracking conversions!!

this lot is gonna make a great addition to my already growing legions, I might sit down at some point and work out what I've got, that should open my eyes!

any how enough whaffling on the the painting.....

Laters
Posted by Anton at 12:40 No comments:

For it is done.

Ok, the defence line stuff is coming along nicely, the plastic kits where a dream to put together loads of detail on them well worth there money, and the bonus this is that the flat sections of the models are textured so when you dry brush it really stands out and enchances the model,

Any how as this blog is adptly named the Anarchy of Anton, and with my bonus from work (Thank you BG!) I've taken the plunge and ordered myself a chaos warhound, So I'll look forward to the step by step progress that I'm going to post up here and spread some of the maddness, the only thing I need to suss out is the paint scheme, and getting my hands on an air brush so I can get it looking sweet!
Posted by Anton at 11:12 No comments:

Well I've been slacking recently, I've nearly got finished another death guard unit trhis time a havoc unit with 4 melta guns, I've also started on my emperors children the test model is about half way through and judging by the comments last night from the club its looking quite promising,

I've been given on of the new planet strike fortess sets to get sorted out, i.e. 2 bastions and a load of barricades so I'll be cracking on with those over the next couple of weeks,
Posted by Anton at 07:54 No comments: