A long long time ago in a bar far far away, A drunken conversation took place with regards to the how the wargaming world would change once tech was more accessible to the masses....

And boy oh boy its now that time!

So after printing a legion table and a zone mortalis board I figured it was about time that I tried something apart from terrain and off to thingieverse I went!

Now some stuff is very practical and useful however I'm looking for the "oh that's cool" files and I must admit that there are some very talented people out there and the designs that they have produced are mind blowing, however the million dollar question is will it print!

So I decided to take the plunge and go balls deep, As I'm purely focusing on the 13th Legion - World Eaters the design that I found fitted the feel of the world eaters and decided to go for it.

so it started off with the front ramp.

then onto the front half of the hull.

then onto the track units,

Then it was onto the task of assembling this bad boy!

the doors were not very defined so I decided to have a bit of a play and use some waste bits of filament to make an edge and then some spare symbols from rhino doors cut out and I was quite happy with the result,

So once all the boring stuff was done, I broke out the airbrush and the painting began.

Once the block colours were sorted then it was just a matter of getting the detail work done, however I'd ran out of gun metal for the side sponsons and heavy bolters 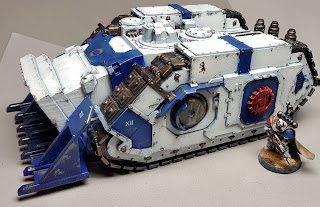 Once that stuff had turn up and Steve over at Barwell Body Works sorted out my poorly airbrush due to another anton special technique that screwed the cone and I didn't even realise it!

Go buy some stuff from him, he's the man!

In fact the courses that Steve runs are superb, go give it a crack! 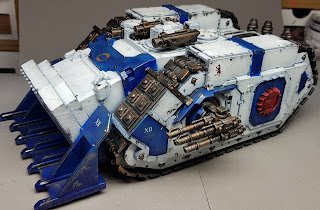 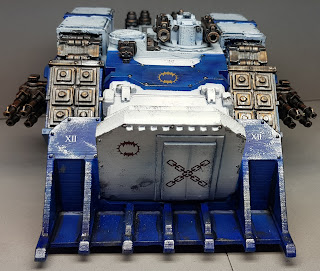 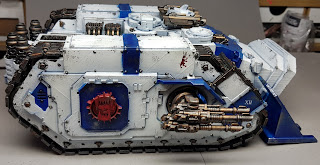 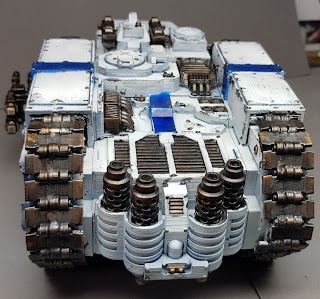 So with the 105 back in action it was a simple task of doing the weapons and gluing them on, I did consider magnets for transportation however they didn't hold very well, So I glued them on.

So that's the transport for some horrible mofo's to go charging across the field of battle, now lets consider the whole situation with the fact that this is 99% home made from files I found on the net and total cost its about 20 quid of material and printer running cost.

So with the right amount of skill it is possible to replicate off the shelf models of a certain size, with liquid printers then that's going to be aimed at the smaller models like infantry and upgrades which you can already do via shapeways however the STL files are not available for purchase so you would need to find these on the net or design them yourself and we're not all as talented in the same area.

Will this replace shop bought kits?

No of course not but a few will continue to push the limits of the tech and use it for the table top world.

Oh and if you want the link to the model click below...

May's over and in more ways than one ;)

Well with the Starwars legion table printed out and the Zone Mortalis done and dusted with regards to the 4x4.
I decided to turn my hand to something a fantasy based this was mainly due to Chrissi wanting to make her own table.

So first off the printer was the massive centre piece, this was done in 4 main sections and the other odds and sods,

the print time on this was quite lengthy to be honest but the finished result is cracking!

So with that out of the way it was time to do some odds and sods for myself. 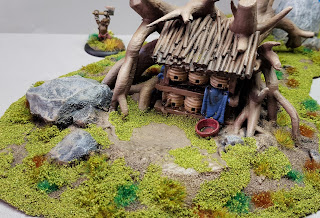 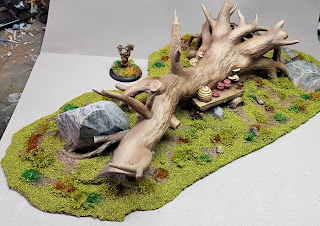 The first bit I did was a two part print and the detail that came out with fairly minimum clean up was cracking, I simply mounted it onto a piece of cork board and away I went with the airbrush! 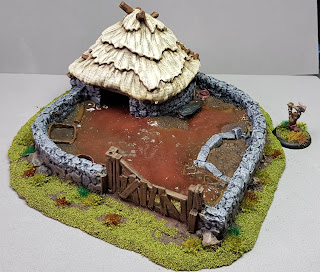 Next up was the pig sty and I decided to have a bit of a play about with the mud in the pen and give it a gloss finish to make it look wet, 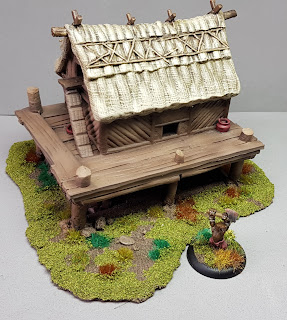 the last bit was the chicken coop, I did the wood at the same time as the fallen tree and simply did the thatched roof with the pig sty.

Basing wise they were simply covered with home made tufts from the flock box and then some "traditional" flock to match the stuff that I did previously for burrows and badgers.

I wasn't just going to stop with those bits and cracked on with some more bits and bobs,

So these were also 3D printed and simply mounted onto some old CD's, A quick zenith high light then laid some brown over the top and they were as good as done.

The last two bits were again mounted on CD's and some playground bark and a hot glue gun and I has some low level scatter that will be classed as difficult terrain.

Next for the burrows and badger board I'm not too sure to be honest, I'm thinking bushes of various sizes and rescaling the trees so that I can have clumps of them to represent a more heavy part of the forest.

So whats the AOS bit all about?

Well Chrissi was asking me a while back to teach her how to play which I took a bit of time getting round to and after various chats about what floats her boat and out of all the genres fantasy was her bag and with AOS being a fairly simple game that became the chosen system.

So after a bit of pondering of what I should do in the  usual Anton manner it was time for a new army!

I picked up the fly dwarves mainly because they look cool only after reading some online tactic's on them that I've discovered that they are "naff" as the flying boats are not worth the points for what they can do however I'm sure at some point in the future these points will be addressed. 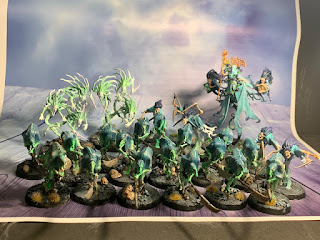 As for Chrissi she's been a busy little monkey and has been blasting various bits out, I've steered her back towards finishing off the units that have been painted but not based and considering this is Chrissi's first batch painting wise its certainly impressed me!

the usual monthly pledge update will be uploaded in about a weeks time however due to a "deal" that I could not refuse its well in the red!

However more on that later!

Well salute has been and gone and boy was it fun!!

So this year Phil had the master plan of doing This is Not a Test, a game that we both like however sadly don't always get the time to play due to various reasons.

So before I start on the all the pics go over to the website check it out, buy something or hell down load the free quick start rules!

this is not a test how to play

A lot of people waiting to come in!

and a cheeky pick up before the main doors opened, This however wasn't for me!

So pics of the TNAT table, it was a combo of Anton's length as well as some bits that Phil had knocked up and all together it looked bang on!

Loads of random models from all sorts of systems!

So during the afternoon I managed to have a walk around and took pictures of plenty of tables, however Mel the Terrain Tutor did an excellent vid of the tables and you actually see me!

The Terrain Tutor Salute 2019 round up

This one made me laugh quite a bit and I spent a good time chatting with the guy and even managed to avoid the political discussion!

This particular one was a hidden gem, all converted and so much detail it was insane. Loved it!!

The rest of the Phat Cats were helping out on the Gringo's 40 table and snagged best in show!

Mel doing his meet and greet at the warlord stand

This mental set up was next to us and was busy all day and quite rightly so! I loved flash gordon as a kid and the workmanship that went into this was insane!

So the usual "Loot" was pretty tame with picking up mortal gods and that was about it!

So onto the the pledge for the month of April.....

Painted - 0 yep that's right I completed no models for the month of April!!

shocking I know however a number of "problems" came up this month so I wasn't fully focused on hobby time more survival!

However that has now all been sorted out so par one more situation its business as usual!!