Even though I'm yet to get a game with the Dark Angels, I'm still chugging though the mass of infantry.

I'm waiting on a tactical squad via Ebay and I've ordered a couple of devastator boxes which will help flesh out the squads that are missing heavy weapons, with the missing special weapons I'll be sorting that out later this weekend,

The assault squad done par the Sargent's sword (and basing) which I'll be giving it some airbrush loving once I get the new pad set up, I'll be doing that with all the power weapons in this army so should have it nailed by there sorted, this is the youtube video that I found the other week that convinced me to give it a crack...


Looks so simple surely it can't be that hard?

So once I've the above done that'll give me the full 6 tactical squads and an assault squad, then it'll be onto the 2 devastator units and the remaining assault unit, but that'll be some time in April depending how Salute with the usual spending as well as a few kickstarters that I'm thinking of backing.

However I found out earlier that my yearly bonus is delayed until April so I could be losing out on some awesome deals but I need to work out what I can jigg about cashage wise!

Housewise myself (well more Nadine) have decided on an actual move date which will be the 29th March so plenty of time to sort out the main bedroom and maybe get some cheeky painting in before it all goes into boxes ready for the big day, I'm "hoping" to get the Sefadu starter set sorted out ready for the demo day on Sunday the 6th April at Coalville Library from 10:00 - 15:00 for a mere £2.50.

but the golden question is how to base them? do I go for fancy resin urban or scrubland style? 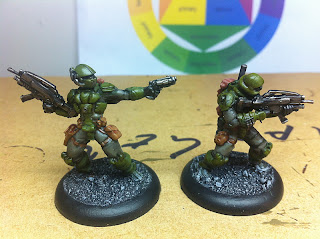 and as always started to read the rules to try and sort a game out, but for various reasons never got round to it, fast forward a couple of years and Beasts of War decide to run a MERC'S week.

Add the fact that one of the guys I know has started a facebook page for MERC players in the Midlands area my interest is now back to the chin scratching point, I've already got the book (packed away some where!) but with MERC's starter sets now being available you can get everything you need in a box for £40.

So the planned "dry" month for March has gone to the dogs already and I picked up the Sefadu box set, so a quick look inside,

so the actual models, the current range of all 6.

model wise they are dynamic compared to the usual 40k/warmahordes so easy to make out who is who on the table,

you also get the cards for the faction pack

all the rules for the models are on the cards and the actual cards are used for measuring movement and shooting, Finally your get 6 D10's as well,

so everything you need to play in a box, If you were to buy all the bits individually then you'd be looking at about £48 without the dice so a pretty good deal personally.

Going back to the Beasts of War week, I've watched about 3 hours of game play with the first two missions that Warren & Luke? have played and effectually got a good idea of the rules and could quite happily play a game with just some rule queries.

All I need to do is bang the models together and find the main rule book once I've moved house!!