I had a new range appear from one of my supplier, Warmill terrain I've seen this stuff kicking about on the net so I figured I might as well give a try and see the quality etc of the stuff,

So the front of the box,

and the bits that you get inside,

so the instructions, double sided and fairly easy to follow

and the actual MDF precut pieces

so the dry fit and no issues at all, some of the bits do fall off so I used PVA to glue mine together and let it dry whilst I went out on the razz!

one of my infinity models so people can get an idea of size, and I managed to splash some paint on it,

might do a bit more weathering, but I'll see how I feel on that on, for a line of sight blocking terrain its a nice bit of kit and some of the variations that they do are nice as well,

overall I'm very impressed, and with the up and coming "man cave" this stuff will make a 4x4 sci-fi skirmish table.

Gruntz... Prepping for the storm...

Well a while back I decided to jump on the Gruntz army profile app and pledge enough to get myself a copy of the 1.1 rule book, I'd been tempted by grunts for quite a while so dived in!

With the rule book being in the final stages of proof read/test printed I've started working on my first (of many I'm sure) forces, I've recycled some old flames of war Russians and flames of war transports. 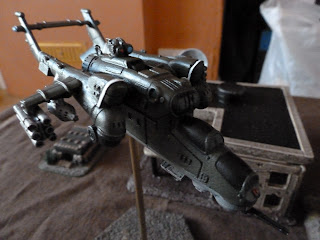 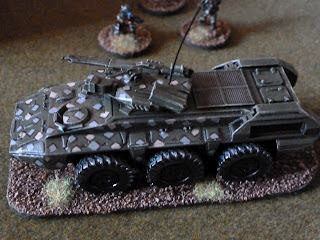 
However as a "challenge" I'm going to resist on buying the world in 15mm and ebay off my various armies for various system that I've not used for a while, and waiting for the revised rule book to come out as well,

but I needed to get some paint on some models to satisfy my need... 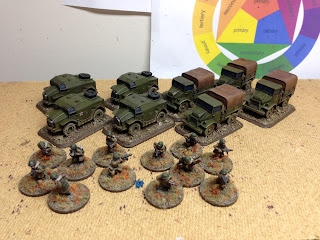 so the whole lot, 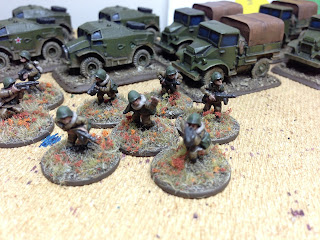 flames of war SMG armed chaps left over from the straf army that I never did complete and is sitting a box semi painted some where! 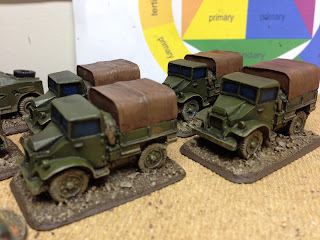 British trucks for a 8 gun 25 pounder platoon that I thought would be cool to use as transports, 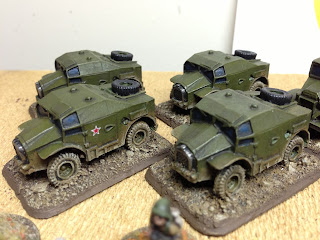 then I found the actual tows for the guns and the weird shape kinda looks sci-fi I've put a Russian star on one of them and I'm thinking I might do the same for the lot, again once I've sussed out the rules/army selection!

I've a feeling that this project is gonna be fun discovering the more obscure 15mm manufactures out there.

Drop Zone Commander, The scourge come out to play (kinda)

So after a few weeks of painting I had the scourge ready to go and face one of the guys at the Loughbrough dice devils,

We decided to keep it a smallish game (which makes a change) and went with a 1000 points,

I decided to run with no AA.

as this was the second game there was still alot of flicking about with regards to the rules and I've now printed off a cheat sheet to speed things up, I'm also going to see if I can find a army builder for this system as it does take a little bit of thinking when it comes down to designing your force. 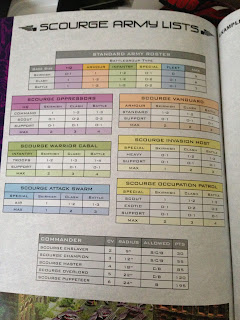 not quite as simple a 1 HQ 2 Troops, but on the flip side there is alot of options and mix and matching that you can do,

I covered off the "first look" on first-look-drop-zone-commander for the initial rules,

We didn't play a mission that that showed, it ended up being a shooting slog between two PHR walkers that were heavily armoured and shrugging off hits and became quite stagnant at the end so became quite frustrating (along with the noise level) so we decided to wrap it up and try again another day.

I should also remember to take my flying bases next time.... 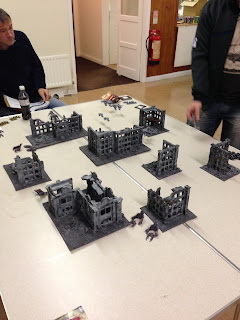 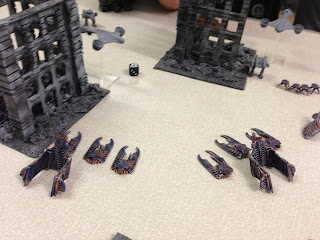 Well its been a while since I popped the box open and looked at the models, recently I managed to actually get a game in and give it a crack! 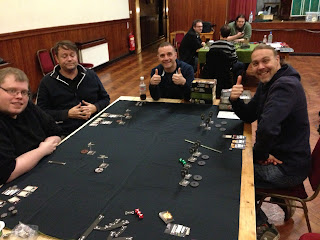 The system itsself is fairly simple and anyone who has played the forgeworld 40K flyer game or wings of war (WW1) or dawn of war (WW2) will see some similar mechanics within the x-wing game,

The activation of the fighters goes on the pilot skill level so you decide what manover your going to perform on a turn wheel the start with the lowest skill number and work your way up, If you do a normal manover then you can do one action which can be evade,focus, barrel roll, target lock and so on, depending on what your ship is capable of actually doing will determine what your able to do, example would be the tie fighter can evade,focus and barrel roll thats it.

If you roll evade/dodge symbols that cancels out a hit but you can have a evade/dodge already on your model or a focus which changes the focus symbol into hits or evades once per turn.

once you equal the amount of damage to the hull points then the ship is a gonna, but x-wings do get 2 shields and normal tie's none, but they are about half the price of a normal crewed x-wing. So it kinda balances out. 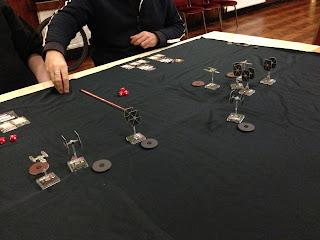 This is the "biggie" its starwars so for me personally instantly a hit, but missions wise very very thin on the ground, now if fantasty flight got a shift on and did the driods and the republic then its another angle that would be great, Hell you could even do cylons against the battlestar fighters and so on. But as it currently stands this is a nice "club" game plently of people moving stuff about swearing at each other and making tie noises and stating that the force is strong with this one. I personally couldn't play this for more than two weeks on the bounce as I'd get bored. 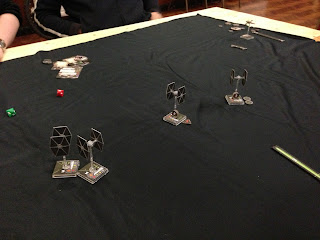 well there pre-painted which is a nice change for me, quaility is good compared to previous pre-painted stuff, and if you want the lowdown on them have a look at...  model review not the cheapest and for some people on a budget not really an affordable game, but the hobby is classed as a luxuery in my eyes and if you can do it on the cheap then fair play.

Dropzone commander, the scourge are ready for war!

So after last months monster terrain painting frenzy I decided to take it easy this month and have a play about with the airbrush that I've had kicking around for a couple of months,

I got a tad carried away and decided to go for gold and get all my scourge painted ready for my game over in Loughbrough next week, Originally when I arranged the game the challenge to my opponent was to play 1K (I think) and have a painted army.... 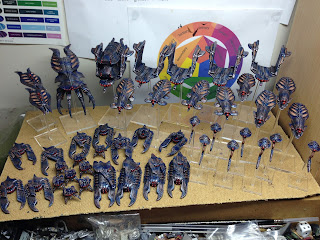 well even if I don't win the game I've gained some awesome man-points! 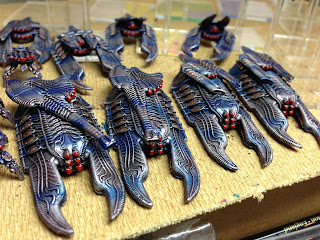 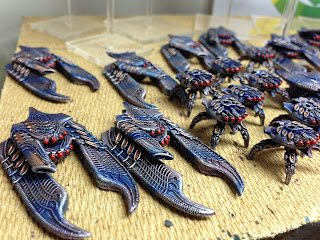 normal tanks with some swarm type guys that melt through armour, 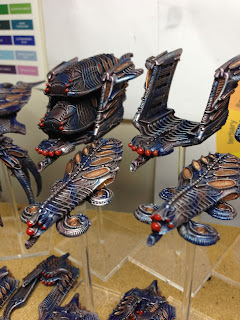 and the drop ships that carry them at the front, medium drop ships at the back. 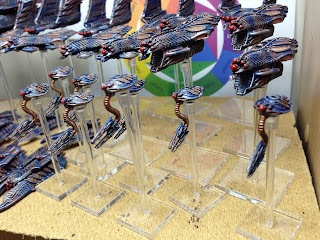 anti-fighter floating screen of doom! again no idea how these will fair but I bought them anyway! 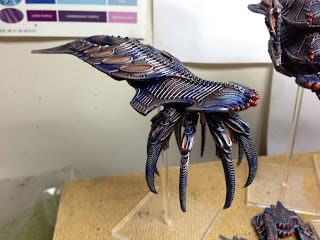 The mothership, this is where I will reside, not a bad ride if I say so myself! And onto the infantry, a bit of flock to break up the bases and they'll be good to go! 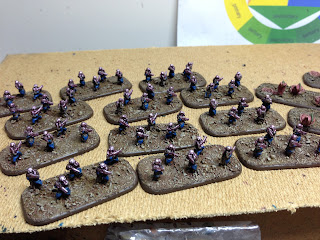 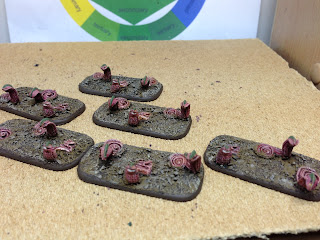 And with that lot I have a +2 model count on the pledge for this month! so everything I bought this month I painted!!

The pledge is going so well this year I'm 150+ models in the black for the year so far, and I've just about tied up all my projects.... 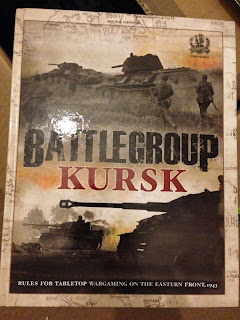