The Angels of Death, The First Founding

Ever since I picked up the Angels of Death codex back in the day.. 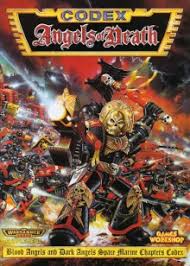 I've always had a soft spot for Dark Angels, the background was always appealing with the Fallen and the relentless hunt for them, could that have been the first steps on my path to the chaos? Who knows!

So when the 6th Ed codex came out I picked it up to see how the Angels had changed since 2nd/3rd Ed and with Jibberjabber on  warpstoneflux.blogspot.co.uk doing a summary of each of the unit types on his blog I've been tempted with the shift back into 40K and the loyalists!

Shocking yes but when looking at what I've got I don't actually own a loyalist army for 40K its all xenos/bad guys.

So in true "Anton" fashion I've started on my Tactical marine squad from the dark vengeance box set, so a work in progress for you all,

So all I really need to do is do the plasma bits and base the unit, I'll be simply basing them the same as all my other armies as I like the mix that I use and throw some tufts in there for good measure.

If you ask any gamer who's been into 40K marines for years or even months! "what would you really like to achieve" if their as mental as me then the answer would be a company of marines, yep a 100 marines. As I first got into GW via Spacemarine I fielded companies of marines which is really easy in 6mm but could you do it in 28mm?

I've come up with my first chunk of my new army 1500 points of spearpoint.

I'm not sure on the weapons in the tactical squads, once they deploy from the drop pods then they'll split into combat squads for objective/cover grabbing goodness. As the heavy weapons are fairly cheap its not too much of a hassle if I don't get to shoot then every turn,

One question I have for the rules lawyers is that can you shoot through the drop pod once its deployed, and do you have to deploy all the doors?

the goal is to have a 3000 point army and judging by the first 1500 it looks like you can achieve the 6 tactical squads, 2 assault and 2 devastator squads. If its gonna be any good on the table top who knows but 4 drop pods on turn one and the rest on turn 2 onwards depending on how well your reserves rolls are, for me oozes of fluff and not a single termi is sight!

so thoughts and feelings on the Dark Angels 5th Battle company,
Posted by Anton at 17:31 No comments:


So after a build up that could rival a heavy weight boxing match myself & Coops got down and dirty with a 200 point game,

As luck would have it we took the same forces....

and coops had the same!

the skill levels and the like were slightly different,

Ruleswise its quite a simple set with the following "rule" being applied to the system:

2D6 + Stat = or more than opponents stat, very similar to warmachine but has more modifiers so doesn't make shooting that easy.

At the start of each turn you roll for initiative using your commanders skill stat and choose to go first or second,you activate a unit at a time and each unit gets two actions, so you can move & shoot, move & move, shoot & go prone and so on, so plenty of options possible depending on what you want to do with your stuff, you can also shoot & move but you need to "upgrade" you unit to do that.

Shooting works quite well you can pre-measure so suss out your best options, and you have a normal range and if you double your normal range that's your long range, if you shoot at long range your at -3 to hit plus any cover bonuses etc..

Assault is a tad more complicated but the rule book has a easy to follow flow chart so you know what you need to do, and there are flow charts throughout the book explaining things and worked really well for me,

Overall I'm happy with the rules system by no means is it perfect but considering that this system is from a one man band its bloody impressive, and if it was any more complicated then would become boring. With a bit more proof reading and general tighting up its a solid rules set that I'll be playing again.

As a standalone system this could be played amongst a club no problem for a while due to the open endedness of the unit creation, I'll explain.....

So you want a "imperial guard" type unit you stat up the unit yourself! yep that's right you have no "army lists" no "codex's" just what you want to take there are some restrictions that you need to take depending how many points your playing but if you wanted a full airborne unit coming in on starship trooper dropships then you can do it, If you wanted a prison world army full of low skilled but fanatical troop you can do it, and so on the only thing that's stopping you is your own imagination!

You can also add perks or mods to units as well so making then slightly better but also giving them the edge over your opponent, but some of the perks and mods are not cheap!, same goes for the weapons that you can give your models & units you choose what you want, did you want frikking lasers or good old slug throwers, plasma guns or pistol welding nutters, basic combat weapons or really big shiny energy powered swords? the choice is yours!!

This is what makes Gruntz wildly different to any other game that I've played, for the powergamers/torney whores yep there are some mental things that you can do but there's aways a way around that that.  This is the one aspect that when I started looking at the system I couldn't get my head around as I'm used to picking up a book and looking at pre-made troops etc and this I could sit there and make a fluffy army based on the "coolness" of the models.

Another "oohhh" for me is that there is NO models associated with the Gruntz system, (apart from 1 mech from Ground Zero Games)  you can use what you like! so google-fu needs to be strong for you to find what you like the look of, or you can simply head over to the excellent dropship horizon blog and check out the links and the reviews of new 15mm stuff that is coming out, I'll be honest this site has opened my eyes with regards to 15mm sci-fi so I tip my hat to the author who maintains it,

There would be no reason why you couldn't do this in 20mm or even 28mm with some adjustments to the weapon ranges, and you don't have to just use it for sci-fi, anything can be adopted with the unit builders in the main book or if your "challenged" with maths like my good self then there is a unit builder program coming out soon that I've been playing about with due to my kick starter pledge last year and its a good bit of kit nice and simple and some cool features that keep me sitting at my PC playing about with different stats for stuff.

So onto the main event, We had a war correspondent for the game so keep an eye out on the gruntz forum for Dan's AAR, but here's a few pic's from the game on Thursday,

Both Black Ivan and the Urban Suppression unit try and take down Coop's Mech but the dice gods deserted me that evening!

Towards the end of the game, Objective secure but surrounded by armour and big guns!

"technically" I won by having a gruntz unit in base to base with the objective but coops rolled me good and proper and was rolling like a daemon for hitting and damage! I enjoyed the game that we're upping the points to 300 for next week so lets see what happens!

Rolling out the Russian's for Gruntz

So a couple of days before the game I decided to paint the MBT that I was gonna do at the same time as the Doe gunship but as the bits haven't turned up I figured I needed some sexy looking armour!

Also the unit card to go with it,

I'm really looking forward to the game tonight and can't wait for Black Ivan to roll through Coopers army, or look awesome as a burning wreck!

I also managed to get the scenery odds and sods sorted out as well,

and the guard tower as well

so watch this space for a action packed battle report and "first look" at the Gruntz system.

So after a bit of a pre & post Christmas/New years slump painting wise, I put my game face on and finished off the last few bits for my Prussians,

So the new Commander model, and some cool rules to go with him!

And the Tanketts, the easiest models in the world to paint!

So as always the painting machine marches on,  but with what?

The club is getting quite frothy about Gruntz and myself & Coops have a game next week, but all of my grunts stuff is done (par 2 models one of I'm still waiting for the extra bits) so nothing really needed to be painted for that.

Well apart from scenery that I've dug up from the stash and some bits I bough but these will be done quite soon...

Then after all of this I'll be ordering my Russians from PSC as soon as I can get hold of them and start cranking out the Infantry for the Kursk Demo board that Coops is currently getting very excited about with PVA & Towels!

I'll snap some pics of the Gruntz game on Thursday and do a "first look" for you guys that are sitting on the fence with regards to the system.