Well after quite a bit of indecisiveness I decided to take the plunge and pick up some scourge for drop zone after my initial game with Lee the other month,

I was lucky enough to get some on auction as the same seller had them going for 10% discount which is the norm if you look at wayland and the like.

So after a bit of messing about I did these as trial pieces... 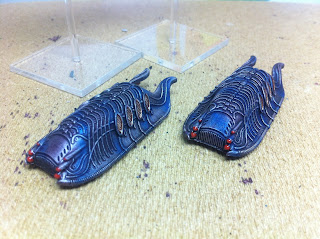 So 2 APC's can carry three stands of guys and that's ya lot!  The allocated drop ship is still WIP.... 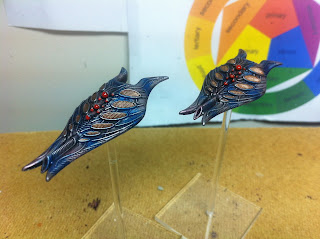 Two fast mover interceptors, no idea rules wise if these are any good, but I liked the look of them so painted these as well,

Over all the bit that I'm chuffed with is the airbrush bit, apart from the king tiger I did for the demo table last month this was my first real solo flight with out Coop's giving me tips,

I've still quite a lot to learn with regards to the mixture and the PSI pressure but a 2:1 mix and 15/20 PSI seems to work quite well so far,

Once all the scourge are sorted then I'm more than likely gonna be packing up all me gaming stuff ready for a house move in the next 4ish weeks so blog updates will be sparse and the pledge is in a rather healthy state but the purchase of more models is going to be slim as I'll be spending my dough on boring real life stuff!
Posted by Anton at 01:47