In the ever evolving madness of the Anton the "ooh Shiny" has once more struck again!

Not content with the gates of Antares stuff that I'm trying to get through I decided to add to my ever growing 40K collection with a start collecting box from the Necron Faction,

back in the day I had these guys and sold them off for what ever reason, however now I'm armed with an airbrush and with various you tube channels showing all sorts of techniques I decided to go for the classic scheme on these guys, 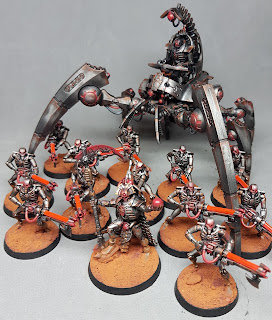 The paint scheme is fairly simple but I wanted an old school look to the necrons, so trying a different technique with the airbrush and blending a lighter metal over a dark metal seemed to work quite well on the stalker, 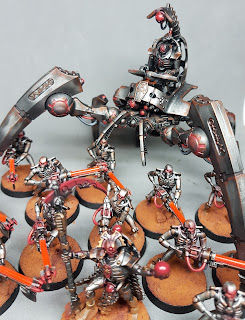 With the basing of the models and the rumoured release of a Necron/Ad Mech box I thought that a Mars inspired scheme would be fitting and Ross gave me the recipe on how he did it on his Iron Warriors. 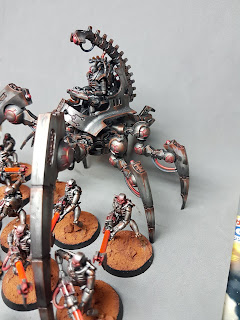 With this first batch done and dusted, I've already started on my next lot and once half term is out of the way and as a break from a guildball commission then I'll be able to work my way though these no problem,

Also with the news from the LVO a couple of weeks ago with the Necron codex hitting the shelves at some point in March this will tie in nicely with this project.

So with that in mind I'll be picking up troop type choices that should fill out the core of the army then simply go with the rule of cool for the other stuff as I get to it and with this force I'll be going for the buy a bit, paint it before I buy more approach. (In theory....)

As usual comments and the like welcome,
Posted by Anton at 13:09